We had snow and then more snow!! Was not expecting it to snow again, even though the weather forecast said it would, I mean how many times do you see snow predicted and it never appears! So Tuesday we decided even though it was freezing to head to the park for our normal get together, especially as we had a couple of new families joining us. About 10 minutes after we arrived it snowed, as in heavily snowed, what a great way for everyone to get to know each other while playing in the snow, happy days. We came home and warmed up,  then L decided it was time for round 2 of playing in the garden, lots of ice to explore, she loved the way the sun made it sparkly. 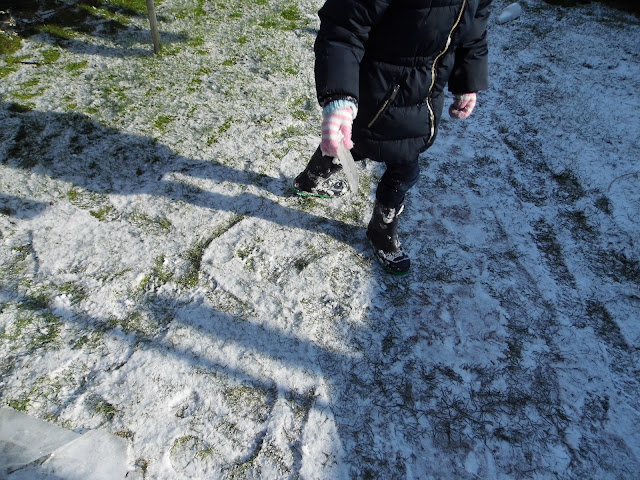 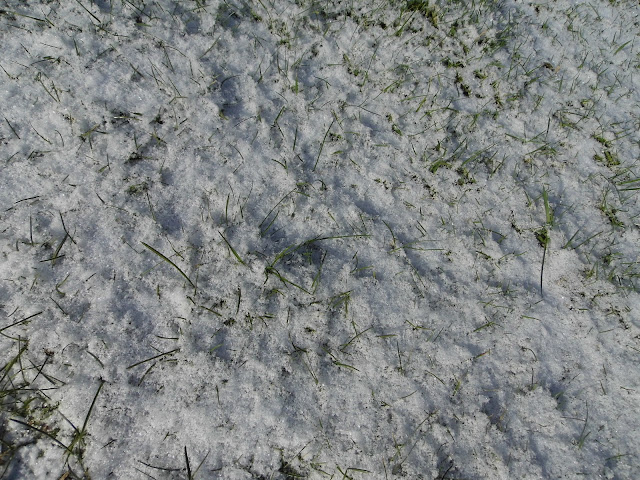 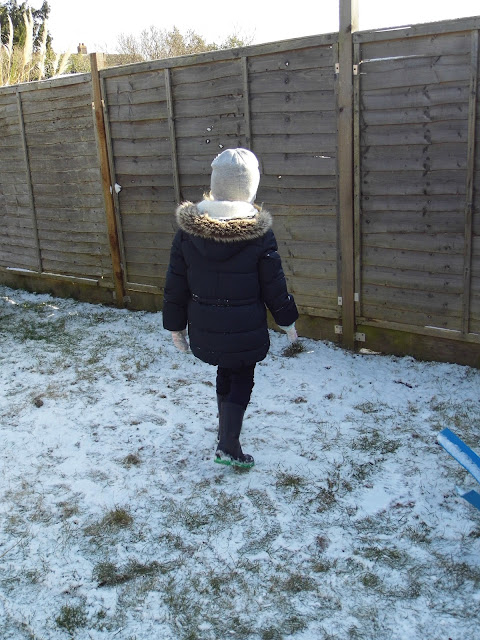 The rabbits actually ventured into the garden this time and didn't seem to be too bothered with it, compared to their last time of 3 hops out and then back hiding in their cage. 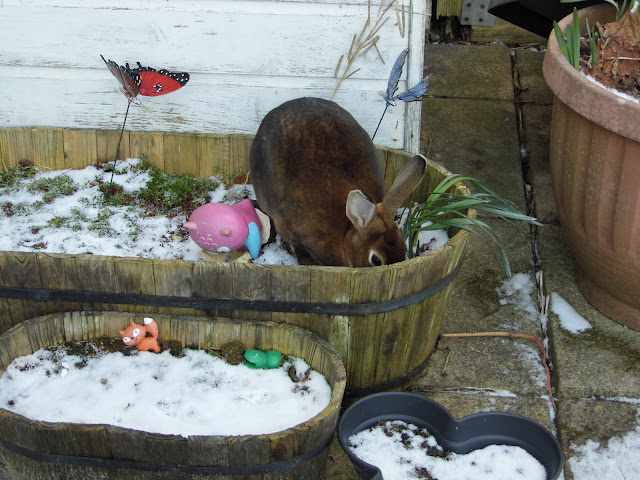 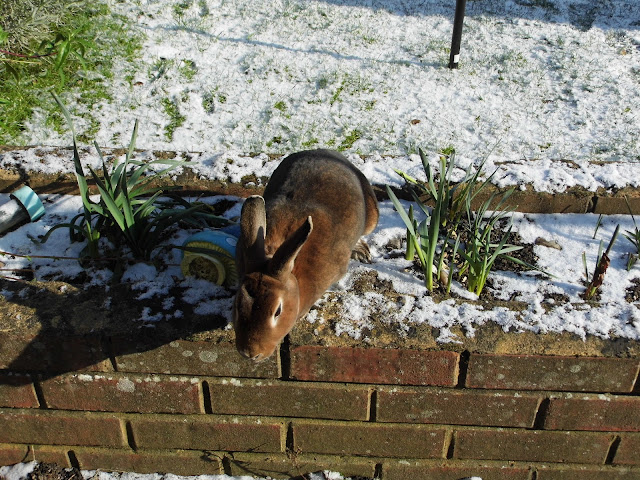 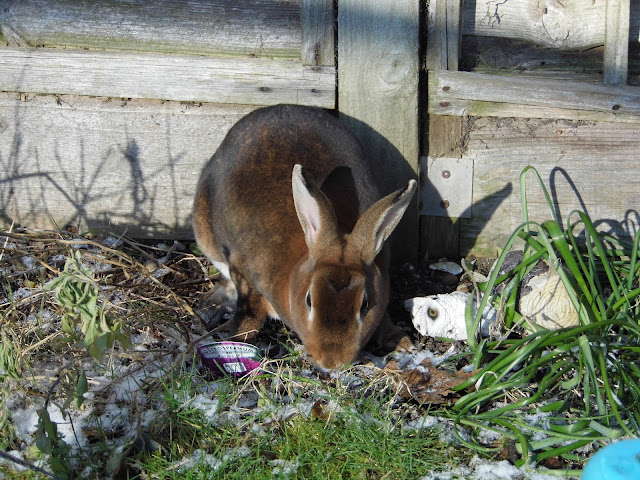 L had decided to take her toy dog to the park, he got rather wet and muddy in the snow, so she asked if we could wash him like a real puppy when we got home, luckily puppy looks like new now she's been washed. sigh of relieve from me as its one of L's favourites. 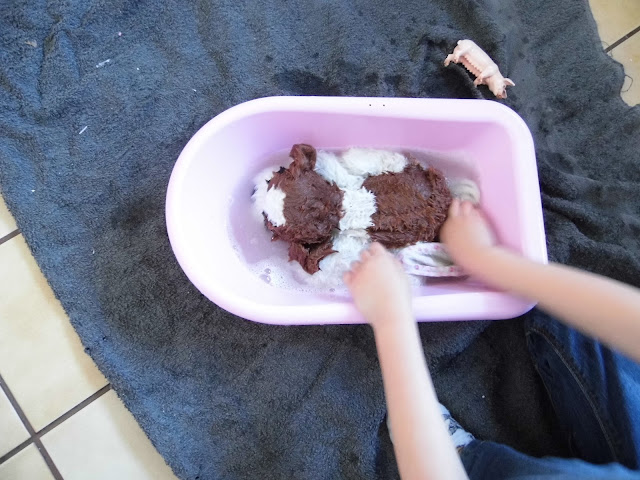 It snowed more, which meant very happy excited children, I have never been so glad that my husband had holiday left over from last year and had booked the end of this week of, especially as he was supposed to be on call. I know it means one of his colleagues had to do it but they all live a lot nearer work than we do, so less chance of getting stranded. Anyway we headed of to the park and woods, to make snow angels and make snowballs. The snow wasn't the right type to make snowmen with but according to L it was heavenly. 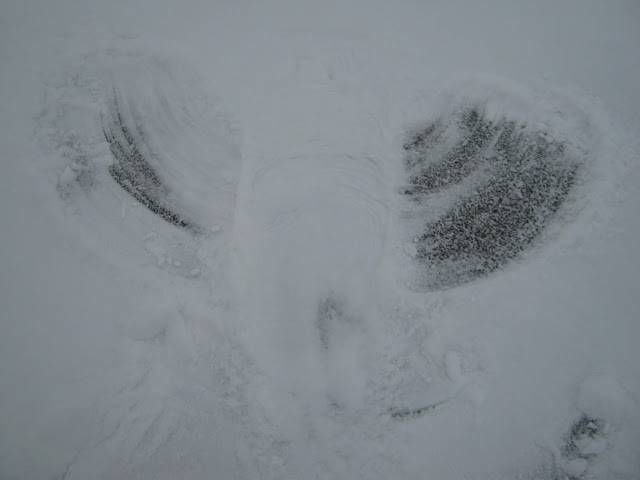 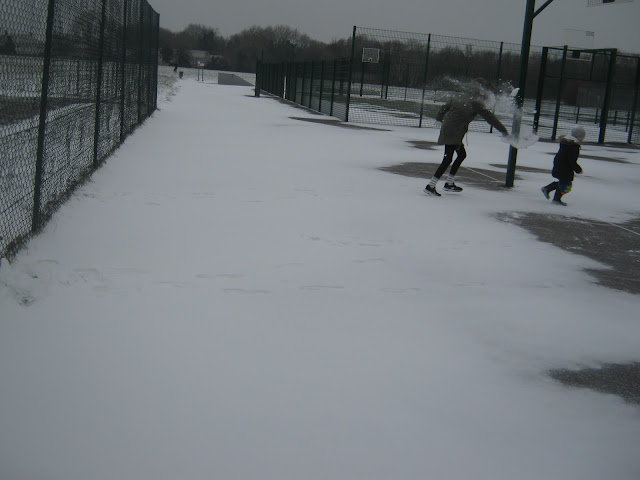 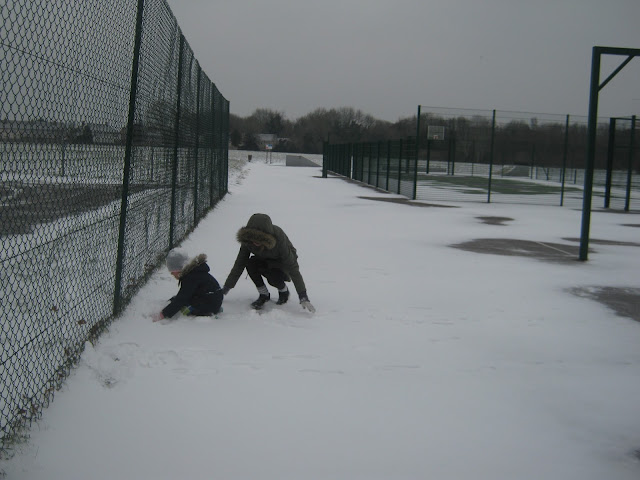 Blackbird braving the cold to find the food we had scattered for the birds. We have been looking at the different flight patterns of birds and how they turn, hoover etc. 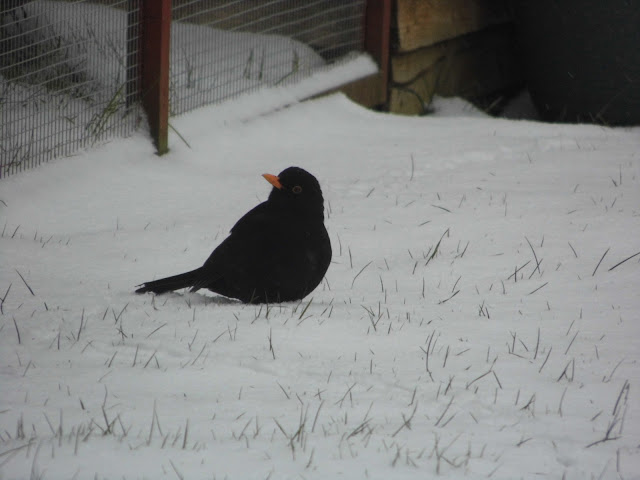 I had brought some flowers to start our spring display, didn't get much further, will leave it for next week when we have more spring like weather, hopefully. 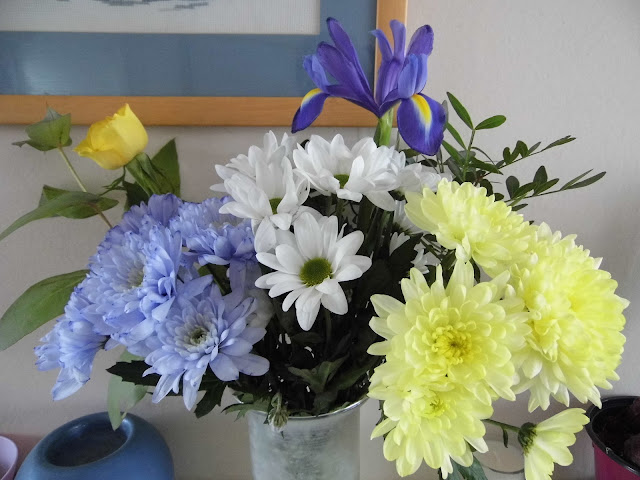 Hyacinths are looking and smelling great. 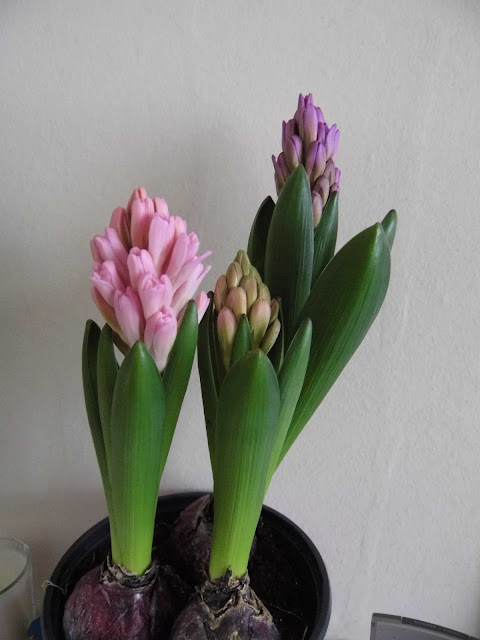 L is enjoying the map work to go with our project on Egypt, I had printed out and laminated these ancient Egyptian mythology card to use as I read the ancient myths to her, she loves that sort of thing. The website also has landmarks, Greek and Roman gods too, so think I will be printing out those too. We've been watching various you tube films about the Nile and the tours around the landmarks of Egypt, must admit I was surprised at how much she was interested in the different sites, the size and variation of the monuments and statues. 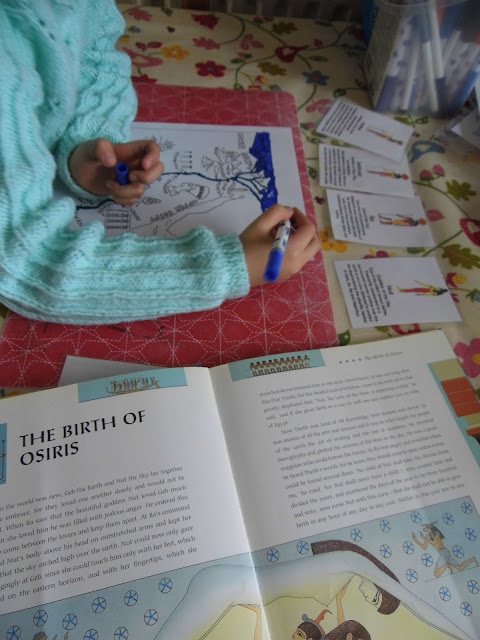 I have finished her jumper just in time for the cold weather, she loves it and would if been allowed worn it too bed! 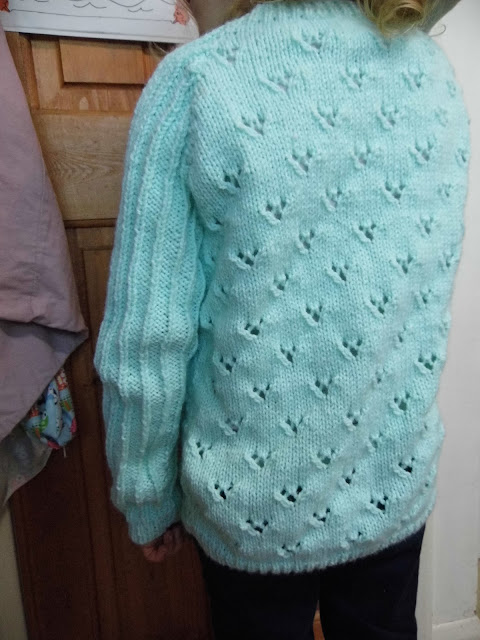 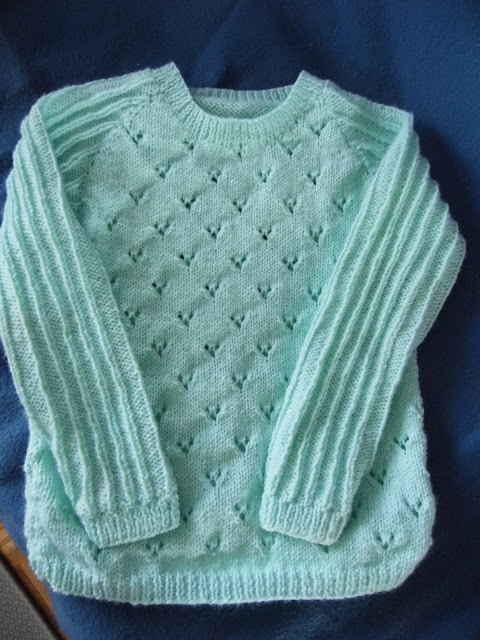 The owl is still a work in progress and have L has chosen Rosebuds for her other jumper, we have chosen a lovely pale blue in a cotton mix, have cast on but that is about it. Have found out that 4 people I know and can knit for are all expecting baby girls this year, oh there are way too many cute baby patterns out there but if you have a favourite please do share your pattern with me :) So at the moment working on using up some of my stash and knitting some little Tegan hats, ok they aren't going to make a huge dent in my stash but fun to make. In the meantime I bought M some Disney books, the story of how the evil character ended up that way, she enjoyed the Fairest Of All and asked for more, luckily they are all on offer in the local supermarket at the moment. I've just started to read Fairest of All and can see why she enjoyed it, its an interesting,enjoyable read, that ties in with the Disney film Snow White. Have also picked up tales with twist, what if Sleeping Beauty didn't wake up when the Prince kissed her. Joining Frontier Dreams 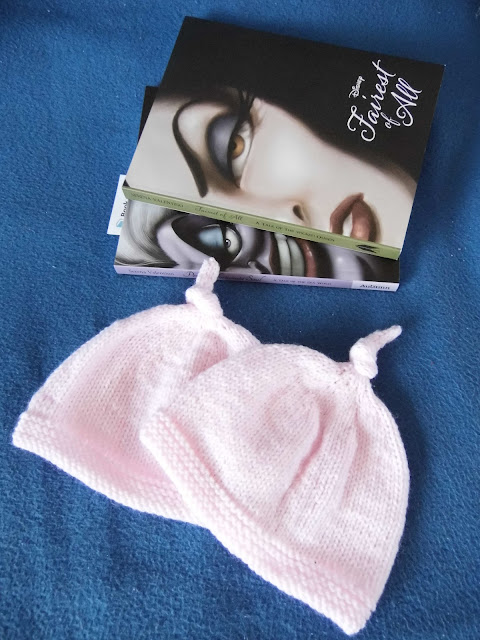