Joining Kat for her Unravelled wednesday, well hoping there isn't too much unravelling going on, I am enjoying working on a cross stitch that I bought several years ago. It was on of those wonderful moments were you pop into a craft shop during the sales and find a cross stitch kit reduced to £6. At the time we were fostering kittens so the design was just perfect, there are four sections one for each season, at the moment working on the Autumn section. I put this away when I became pregnant with L and started knitting baby bits instead, so 5 years later, think it's time to start it again! 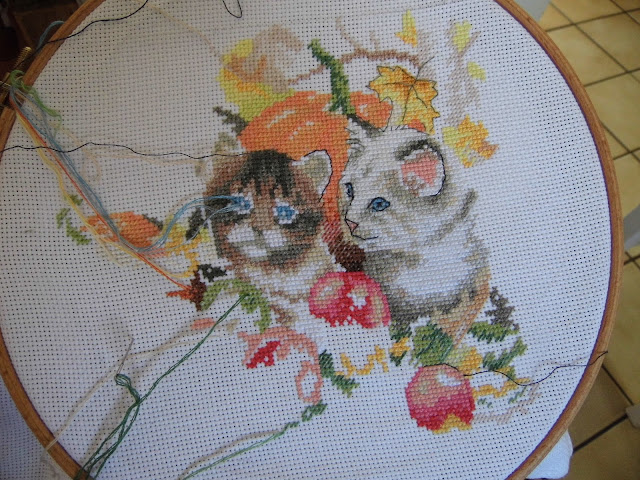 I am still trying to use up some of my stash before I buy anymore wool but gave in today but will write about that in a minute. I discovered two balls of white wool, so thought I would use them to knit L a cardi but not sure if there will be enough or not, so knitted the back to the shoulder shaping, then left it on a spare needle, then both the sleeves, now working on the front, depending on how much wool is left over, will determine the length of the cardi. I am enjoying reading  Elly Griffiths Smoke and Mirrors. I have loved her Ruth Galloway mysteries and have come to love the characters and was well as the stories they are involved in, her writing is very atmospheric, you really feel you are there with the characters. I still have one of the Ruth books to read but saving it till she releases the next one, as I don't want to be left without another Ruth book to read. I know sounds strange but then chatting to a friend that I had recommended the books to and she has done the same, so maybe not such an odd thing to do! Anyway back to Smoke and Mirrors, it is set during the 1950, the main characters are friends that served together during the war, one now works as a policeman the other as magician, a good story but doesn't have the same sort atmosphere and characters as the Ruth books. 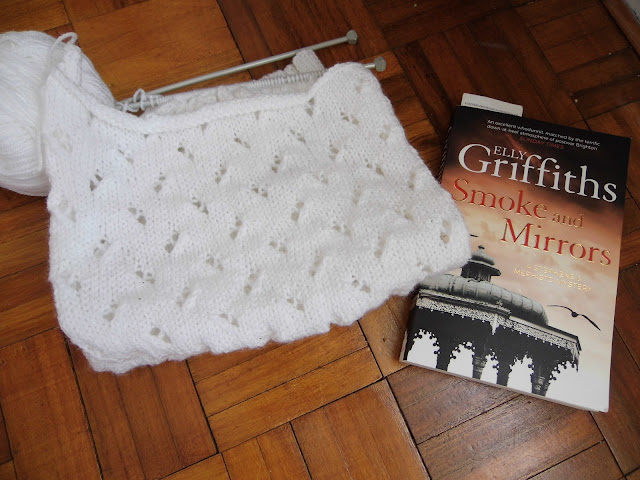 Now I was determined to not buy anymore wool until I had finished some projects and wool from my stash but I was browsing patterns on pinterst and L spotted this cardi and asked if I could make it in grey with bright pink patterns. So I bought the pattern 2 weeks ago and resisted the pull of the wool shop until today, I needed to pop to the shops to buy some wrapping paper for my husbands birthday, it's his 50th tomorrow, he is trying to ignore the fact it's his birthday and has banned us from making a cake! Anyway the wool shop is right opposite the card shop, so thought I would pop in and see what they had, found some lovely wool, saying I wouldn't start it just yet. Well came home and 30 minutes later I had cast on and knitted a couple of rows............. This is the first time I have knitted a top down cardi, so looking forward to seeing how it takes shape, think I might need to circle the size I am doing as the pattern does from newborn to 12 years of age and covers several pages. 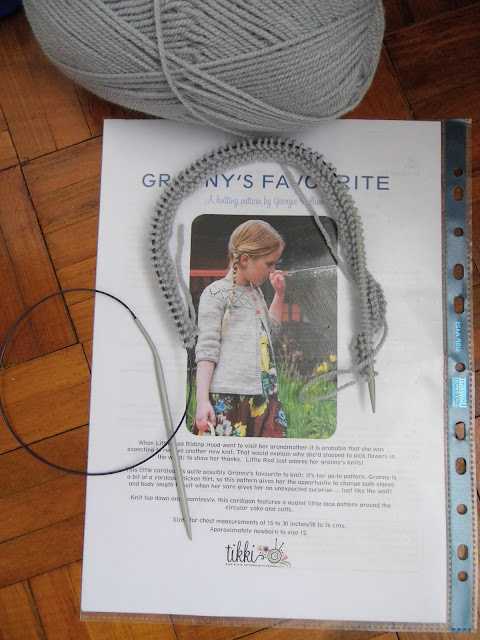 On sewing front, I am planning on making L a larger version of the purple winter coat I made her two years ago, pleased it has lasted her two winters. I have got as far a sorting out the pattern and the fabric I bought last year but not got much further partly due to the fact that I am not exactly following the pattern. The original pattern had ruffles and large fur trimmed cuffs and wan't lined, so I did away with the ruffle and cuffs and lined the coat with fleece to make it warmer, it worked very well but the sleeves need to be a bit bigger so it is easier to fit a thick cardi underneath. I will get there just need to be in the right frame of mind to juggle pattern etc.
Posted by Helen B at 08:51

Email ThisBlogThis!Share to TwitterShare to FacebookShare to Pinterest
Labels: embroidery, knitting, My Reading