There might not be any more human babies here at the moment but we have new fur baby called Max (named by L). At the moment he is at the lets pounce on everything stage, especially toes, so the girls have taken to wearing socks. He isn't causing any damage when pouncing on their toes but it is a bit unnerving so can see why they prefer to wear socks. So knitting is done while Max sleeps or upstairs as the movement of the knitting needle is causing too much interesting for a such a little kitten. He is too little to manage the stairs yet, though he is trying but hindered by no carpet just varnished wood, so a bit slippery and no fabric to get a hold of. 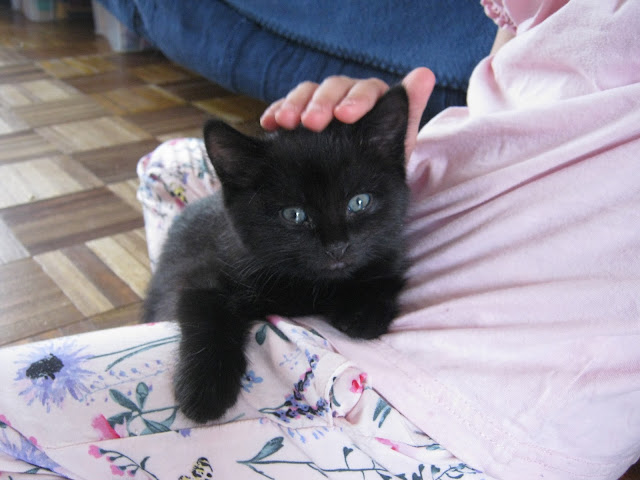 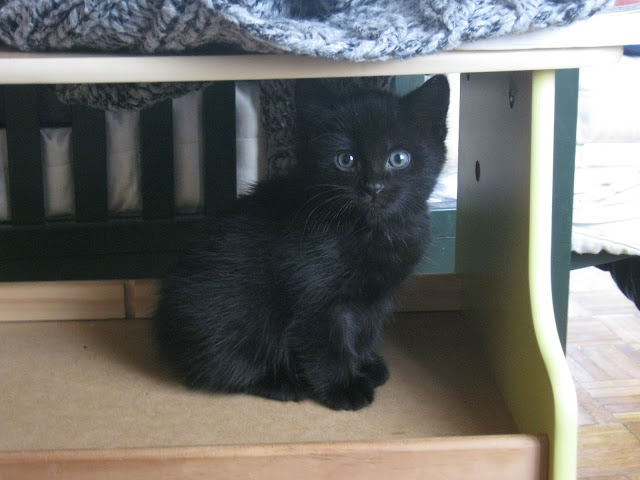 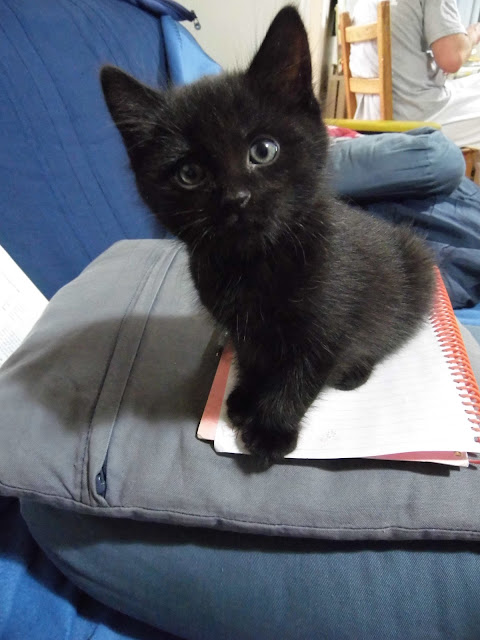 Maybe not the best photo but just loved the way he crashed out, absolutely exhausted after he spent an afternoon playing with visiting friends. 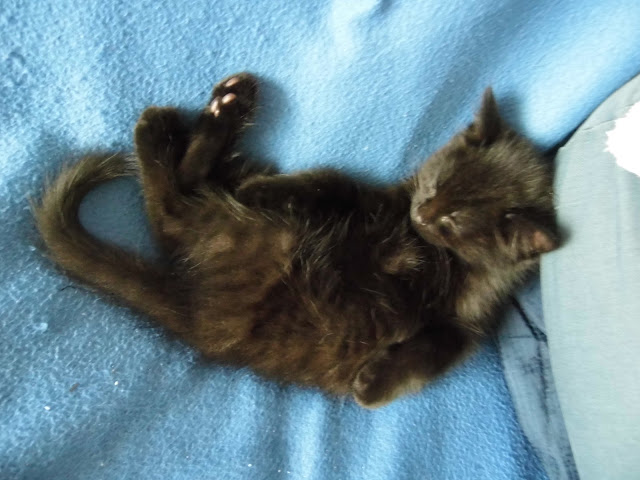 Now those that know L well, will know spending time with her is always fun, she has a great imagination and says what she feels. Today she finished her maths and announced "I've finished my sums Mum and marked them all so you don't have too." I managed a thank you, while trying not to giggle, now working out how to reply to that! Yes she does have a 98% accuracy rate but marking your own work...... A friend did point out that you have to just love her confidence in her own ability :) This followed on from a conversation at the weekend, well it was more of statement form L, having just tidied and cleaned the breakfast bar, L came in cheering and said "Yay that means we are doing science experiments." Honestly I do tidy and clean my breakfast bar daily not just when I am doing science experiments on it. But it does say a lot for L's interests, books, nature and science experiments. So not wanting to disappoint her, I found  out some iron filings, a piece of cardboard and different shaped magnets. Sprinkled the iron filings on the cardboard and used the magnets to draw pictures, I also got her to hold the different types of magnets we had under the cardboard to see the changing in patterns, we used a horseshoe, ring and block magnet.

We've also had more fun exploring motion, ramp building and seeing how far the car went, the speed it went etc depending on how steep the ramp was. 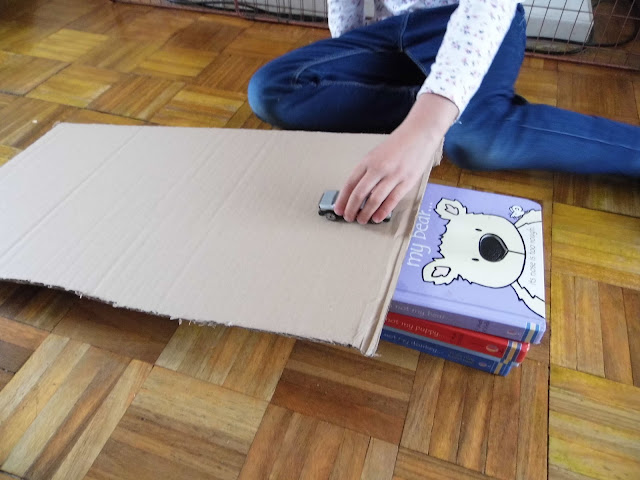 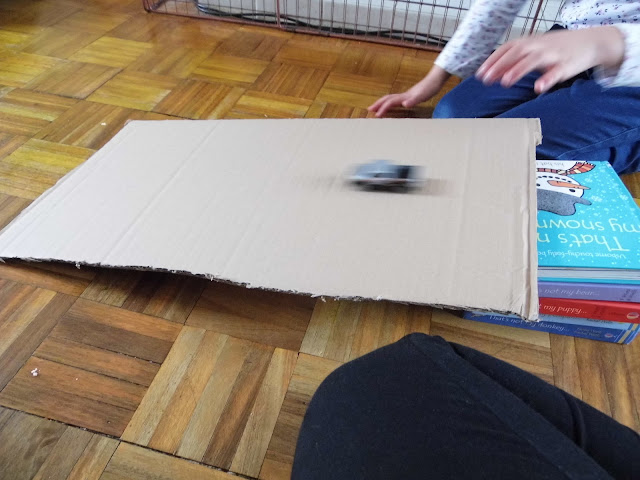 Ok the other part of this experiment was seeing whether you could get the car past the kitten or not! 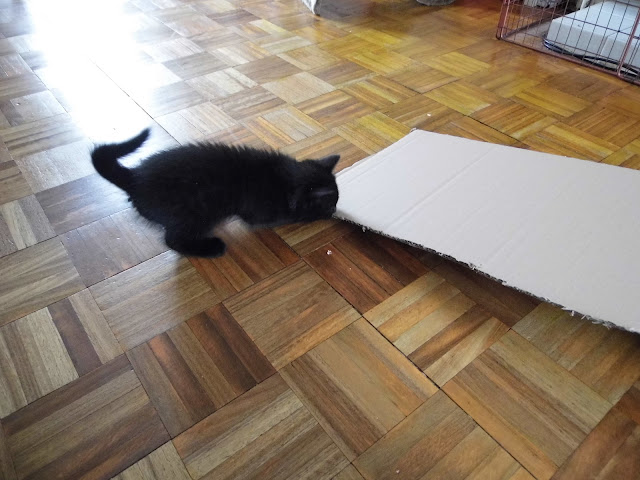 Still using the same balloon from lasts weeks experiment, I got M and L to build a lego vehicle that could be powered by a balloon. At this stage Max had worn himself out chasing cars and was fast asleep, thankfully as pretty sure kittens and balloons are not a good mix! 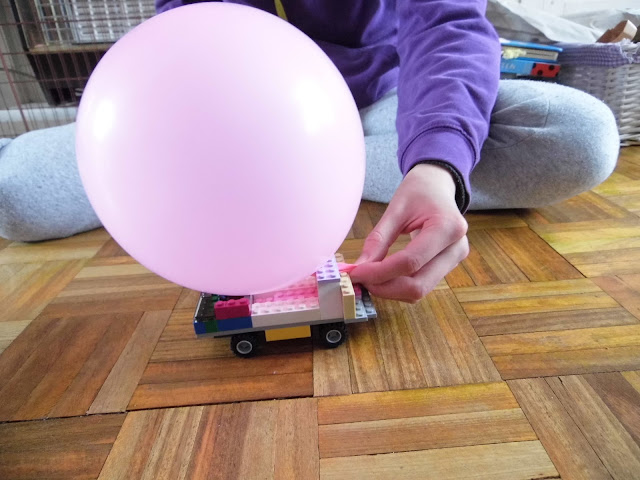 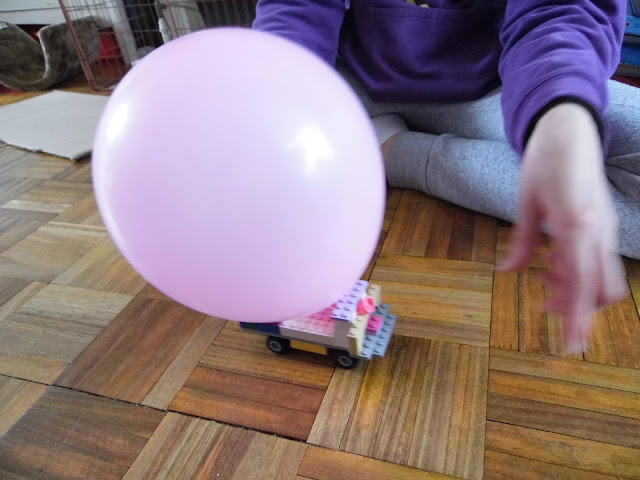 Balloon is beginning to loose its elasticity but we still managed to create a hoover craft, using a CD, the push down top of a water bottle and a balloon. Using a glue gun to glue the bottle top to the CD, then carefully stretching the balloon over it, if you get it right, you can blow the balloon up, push the stopper closed, set it down and then open it up and watch it hoover across the table. 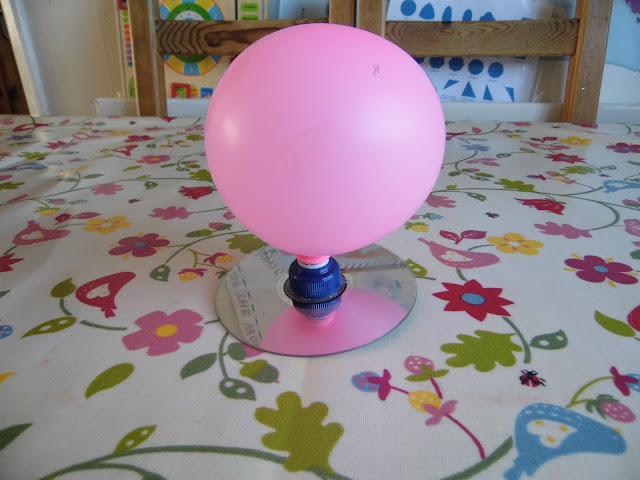 Making the most of the sunshine, finally got up the allotment and we planted out onions and lots of carrot seeds, Admired the apple blossom 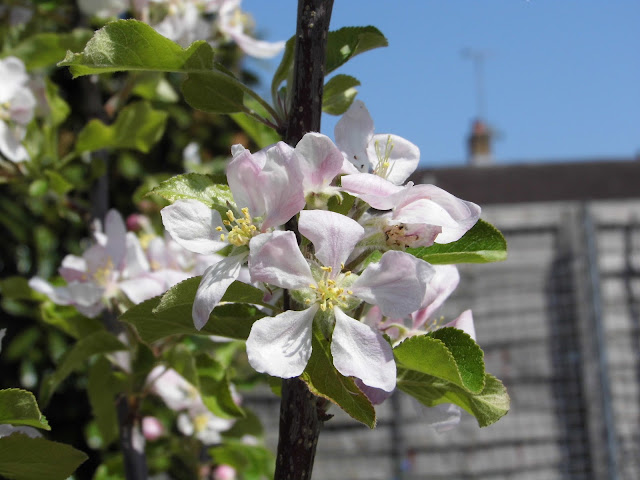 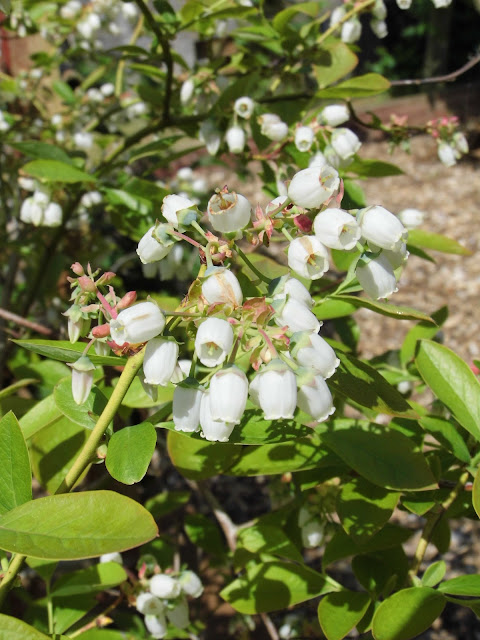 The redcurrants have lots of fruit on them, so hoping for a good crop this year. 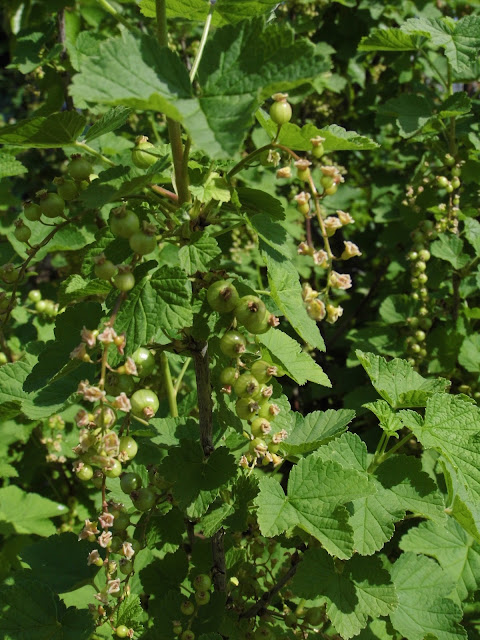 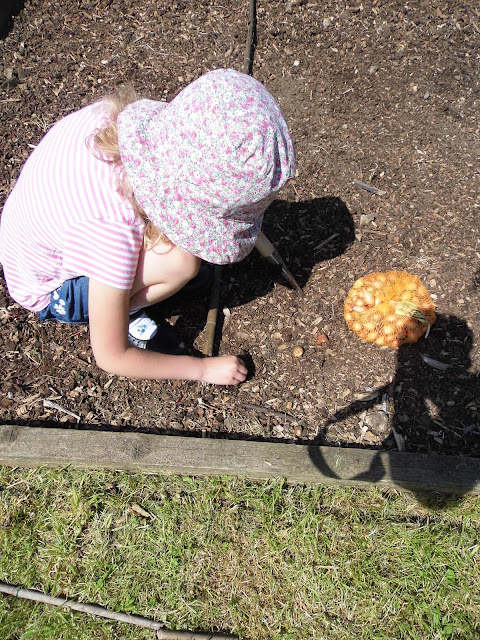 We then got very sidetracked as we discovered two slow worms, they were both out on the grass path for ages but was so busy watching them, I didn't think about taking a photo, you can just spot this ones head poking out. We then uncovered another patch and discovered an ants nest, they had made a loads of tunnels just under the matting, so you could see them really clearly, along with their eggs and larva, so L and I spent time watching the ants collect up their young and move them to safer home. 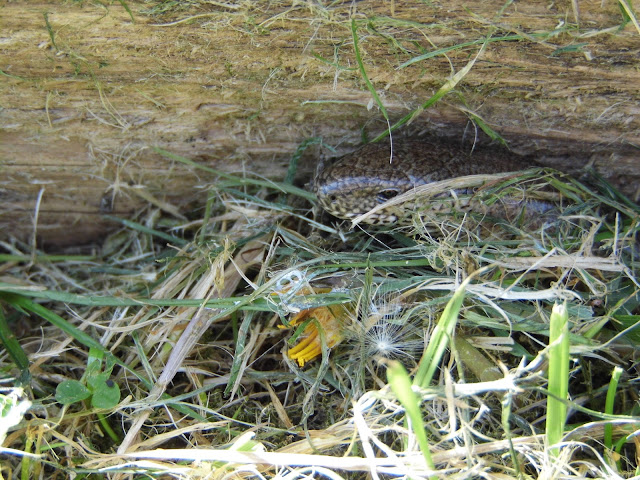 Finished making another very pink baby cardi this wool has a sparkle running through it, not that I could get the camera to pick it up but have a happy friend so that is what matters. 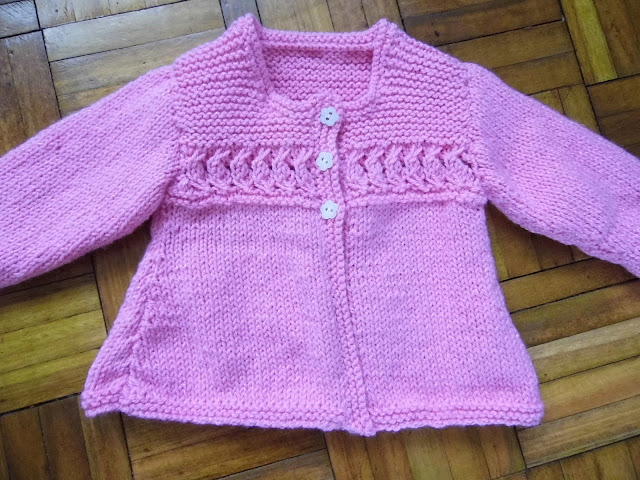 Now this little cardi sirdar 1816 is a real favourite of mine, there's very little sewing up as you knit the fronts and backs all in one and the join the sleeves in, so only need to sew the under arm and sleeve seam. The only downside is the amount of stitches needed to cast on to start with. 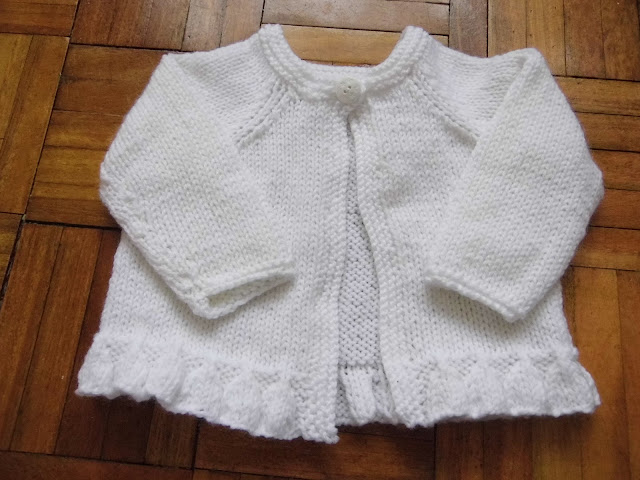 On a health front, I an an optician appointments the other Friday, they were a bit concerned and referred me to the hospital to have a thorough check out of the back of the eye, they use drops to do this, eye is fine and a huge sigh of relief from me. Fast forward a few hours later, I started to feel very itchy,flushed skin and hives, so took some antihistamines but they didn't seem to stop it. So called out of hours and as I am chatting to them started to feel breathless and voice was starting to become croaky, so they phoned an ambulance which was with me within minutes. Spent several hours in A&E and discovered the major problem with having an allergy to steroids and the treatment of allergic reactions, steroids are normally used, plus the fact I have several medicines I react to so they don't like to give you anything, just in case, which is good in one way but not when you are feeling very nauseous at this stage. Spent the next few days feeling a little bit emotional but will say M was amazing as she was with me at this stage, even though she said later she was really shocked how swollen my neck was, she kept her head, got the kitten out the way and watched out for the ambulance, let the crew in and got her Dad.