We've had a busy couple of weeks, including routine hospital trips, Thai food festival, trip to Ikea, some ruthless decluttering, decorating, crafts and home education going on. So now feeling fairly organised as lots of things on that to do list have been ticked of.

Over the last few months I have been talking to lots of people with preschool children considering home education and interestingly the main concern is how to teach reading, followed by cost. As to cost home education can be as expensive or as cheap as you want it to be, cheaply you can use lots of free online resources, you tube, with some printables and lots of books from the library, to expensive buying in a complete years curriculum including all text books, readers, worksheets etc, or use one of the online schools like interhigh. So here are some resources I've used, this  website has a very good list of home ed resources by age and subject some free and some not, anyway that should give you lots to think about and try out. Ambleside Online is based on Charlotte Mason, lots of reading ideas for each school year. All in One Homeschool which is a free curriculum covering all ages but with lots of printables for learning letters ets,  they also have art, history sections too.  There are the alphablooks videos, plus the alphablooks games, starfall, teach your monster to read. There are loads more resources but I'll start with these. So plenty of resources,  its more a case of finding out what best suits you and your child's learning style, a structured approach or a more just see what happens or unschooling, not only are their lots of different resources, there are lots of different home ed styles too, we are rather eclectic here.

I can really relate to that initial worry about learning to read as that was my main concern when I decided to home educate O, the local experienced home educators all said not to worry it would happen! But how, having at that point a very school based view on learning to read, in which they seem to make it very complicated with lots of resources, resources we didn't have at home, anyway the home educators were right it does happen. Now I am that person and want to say don't worry but that is not enough, so here are my thoughts on the subject, don't rush it,it will happen and that could be anywhere between the ages of 4 years old and 10, maybe even older, reading and sharing stories is fun and the main key to wanting to learn to read. That being a home educated non reader isn't an issue as you adapt the environment to their ability, you can read the maths question to them, watch documentaries, do lots of hands on experiences, read books to them use, use audio books,  lots of discussions, questions to be answered, so actually being a non reader isn't a hindrance as it would be in school. The main thing is they see you reading and enjoying books, sharing stories with them etc. My oldest learnt to read fairly young, would of said a fluent reader by the time he was 6, we listened to stories, read books together, O asking what words meant, using some ladybird books and Bob books for some phonics. With M it was more complicated she has ASD and at 5 her verbal dyspraxia meant most of her speech was hard to decipher let alone the thought of teaching reading! She had intensive speech therapy for many years and alongside that we used Reading Eggs and Explode the Code to support her with her speech and reading, she now speaks clearly and reads fine, both took time and practise and learning to read helped her speech. L has just turned 5 and wanted to learn to read but then decided the basic phonic books weren't that interesting she would much rather listen to a more complicated stories, so we are dipping in and out of reading, if she asks we do some, she is enjoying Reading Eggs, which she has access to when she wants and we will just see what happens, there is no rush and she has an insatiable curiosity about the world. We play listening games, go for a listening walk,  seeing what we can hear, making rhythms and rhymes up, wanting to learn to write her name gave L an interest in letters, drawing letters in the sand pit, playing I-spy helps - listening for the first sound of the word, there are so many things that we do that are all help the early reading skill but we don't actually realise it. Writing happens through early mark making, painting, colouring, play dough, playing in cornflour gloop and making patterns, all develop the skills that are needed for later writing, developing the muscles in the hand, co-ordinations etc.

On a crafting front, I've finally finished the body of L's cardi and started on the sleeve, loving the fact that the only sewing at the end will be the sewing in of the ends and buttons. Joining Kat for Unraveled Wednesday 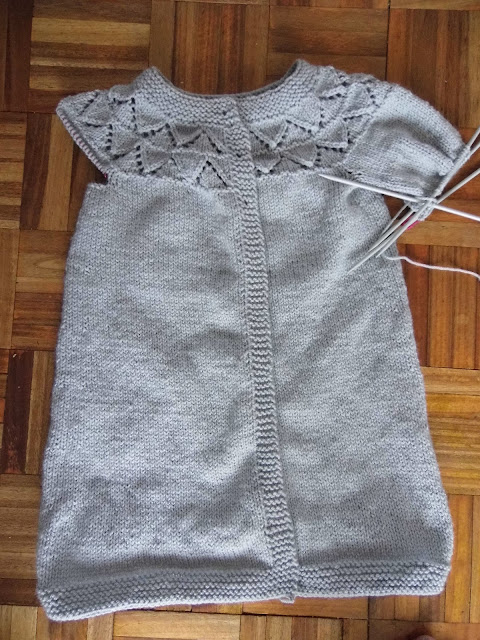 Then couldn't resist starting another project, Sirdar 4810 making the v-neck jumper, with the ladder pattern, this is another Christmas present. Reading wise, I've just finished reading Wild Designs by Katie Fforde, an enjoyable light read which is what I needed as the rest of my reading has been biology text books and syllabuses, decision has been made, mainly by M deciding which text books she preferred, hopefully she will enjoy them. Biology was one of my favourite subjects when I was at school, so hoping this goes well, fingers are crossed, the IGCSE maths is going well but slowed down on the English at the moment. 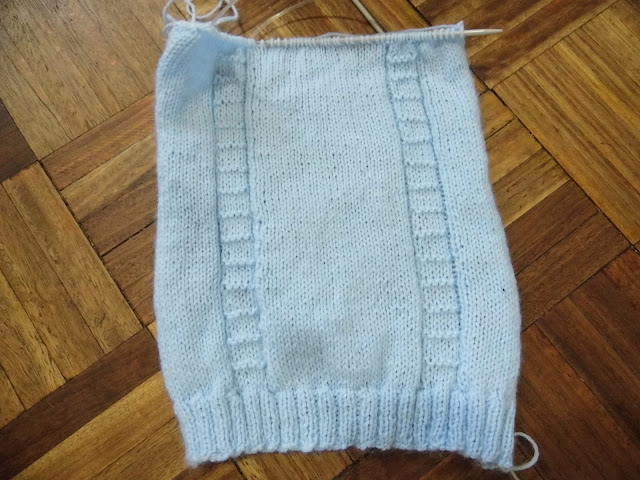 The weather is all over the place one minute it feels like autumn and the next a hot sunny day! One very wet Monday we joined friends for a walk in the woods, children in waterproofs and wellies, adults with umbrellas and of course wellies. They had a fantastic time, exploring the stream, puddles and mud etc and yes my 14 year old has as much fun doing this as the younger ones. Then home to dry of and snuggle up under a blanket to watch a film, followed by the next day and a trip to the park with friends where we were trying find shade as it was rather hot. Not sure if my allotment knows what it is doing other than producing a lot of slugs!!! Have had some lovely rhubarb, lots of blackcurrants ripening and enjoyed a couple of windfall apples.

Last week O had his allergy appointment, no change in his allergies but he then mentioned he had had a reaction to banana the other week, so after a discussion and more tests that is now of the menu, along with a warning about the link to latex, so to be careful! L had her allergy appointment on Thursday, her tests showed she might of grown out of pea allergy, so we will be invited in for food challenge but that won't be till February next year. We've been here before with soya and she failed the challenge at the first mouthful, so while hopeful it's tinged with that result. Now if she passes her pea challenge then they might take her in for a peanut challenge as that is one food we have never given her, so only going on skin and blood tests, be nice to have a few less allergies in the house, to say the least.

The cupboard of doom, or the most unorganised, dump everything in there cupboard in the house, aka the cupboard on the landing is now decorated and sorted, lots more space, it's a deep cupboard so takes a bit of thought to what goes where but all children's craft bits are sorted and amazed at how many different containers of coloured rice I have, it's played with regularly but normally it's kept in a couple of different places! Seriously though just how many towels does one family need, even if I add in pets and towels for work. So below is the before photo top shelf is spare throw for the sofa, lace making board, more than one bag of toy stuffing, second shelf towels and behind that there are boxes of soap moulds, candle making and bath bomb ingredients. Next shelf is a mixture of den building and scene creating stuff for childminding, more toy stuffing, various toys and pile of exercise books. Bottom shelf is children' craft bits and anything that didn't fit in elsewhere! 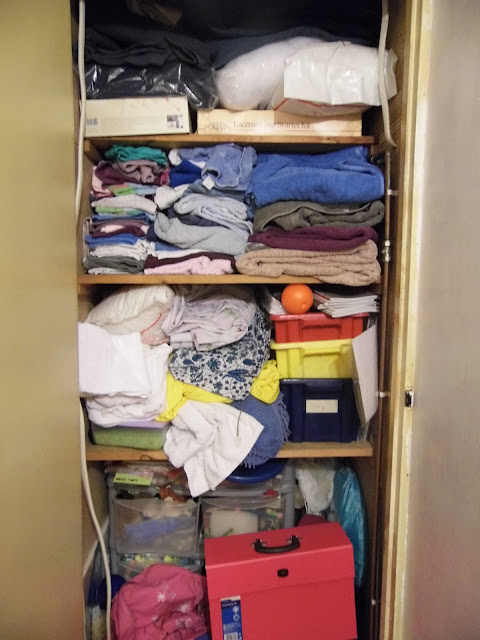 Now a rather organised cupboard and flannels and hand towels in baskets mean they don't topple over every time you try and get one. Also meant I now have room for all the paper that I was given, all A3 size or bigger perfect for painting on etc and the white basket is empty, now that makes me feel good, everything that hasn't gone back into the cupboard has been donated to other people or charities. Next step is my bedroom but that will be next week, hopefully, mind you we need to rip up the old bathroom floor as we will be having new bathroom floor, looking forward to this rather than rather worn tiles! 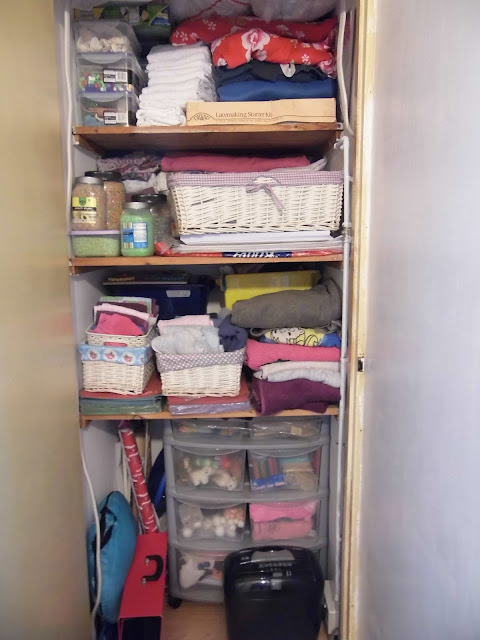 This weekend was the local Thai food and craft festival, it's now in it's 3rd year locally and hope they keep going, weather was great, I love Thai food and we all enjoy the entertainment. 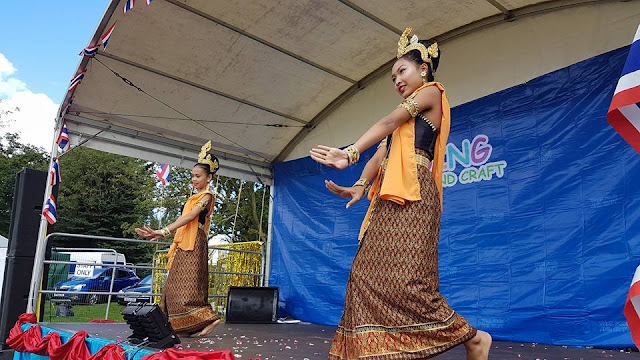 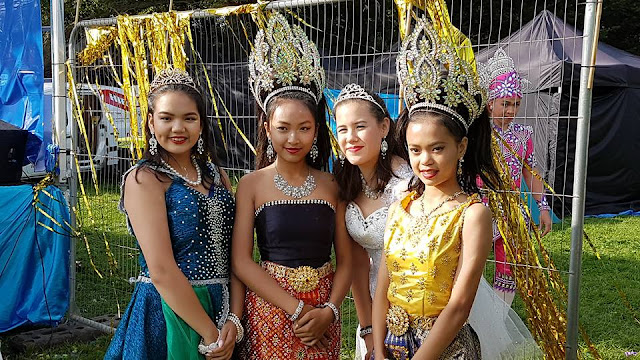 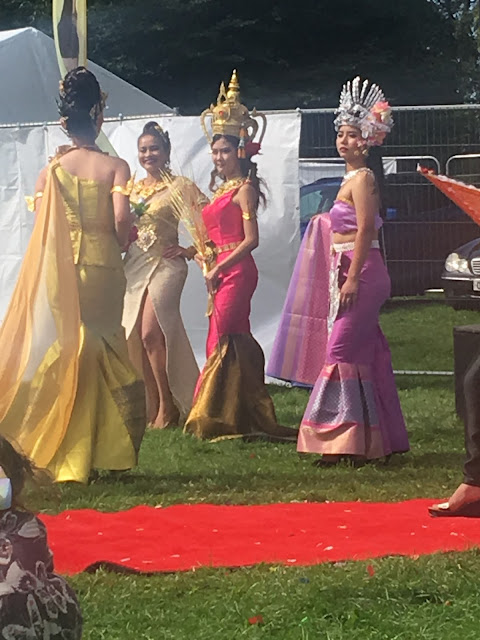 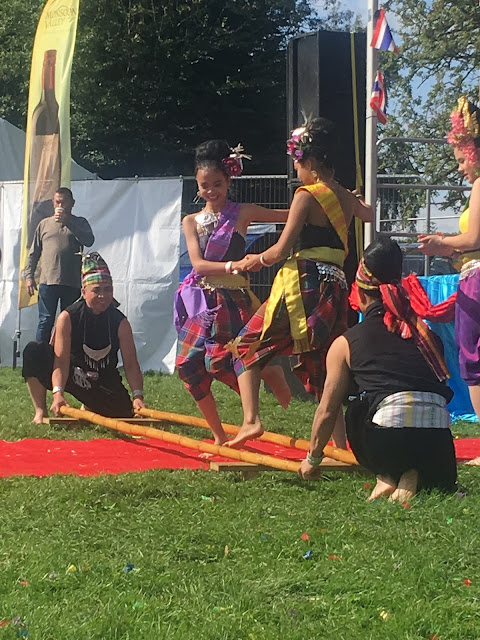 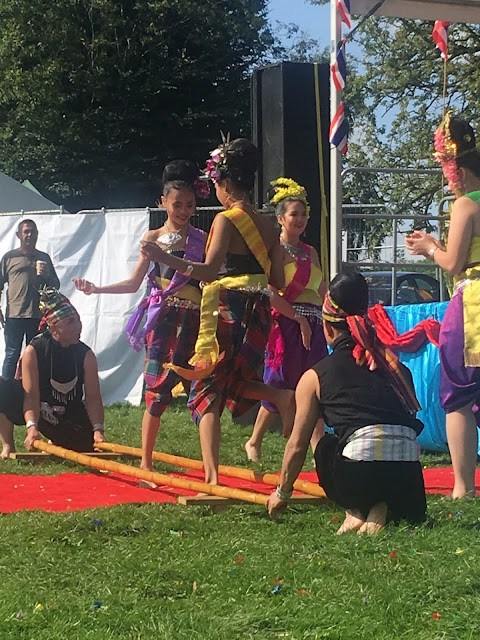 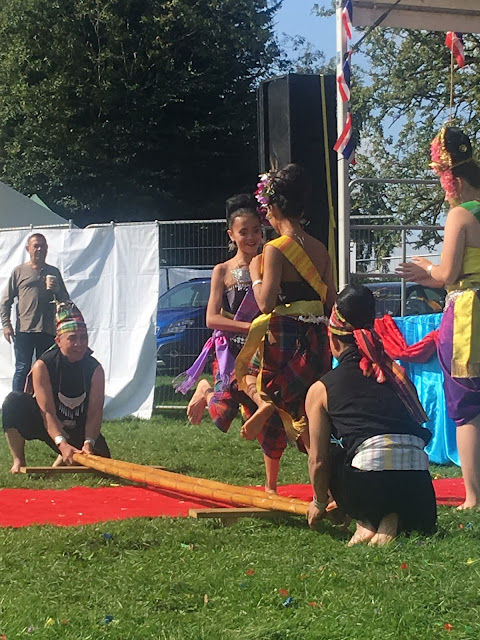 A selection of Thai desserts and there was an amazing lady selling cakes, I don't think I have ever tasted such delicious, light fluffy cakes as these, must try and find a recipe for Thai coconut cake 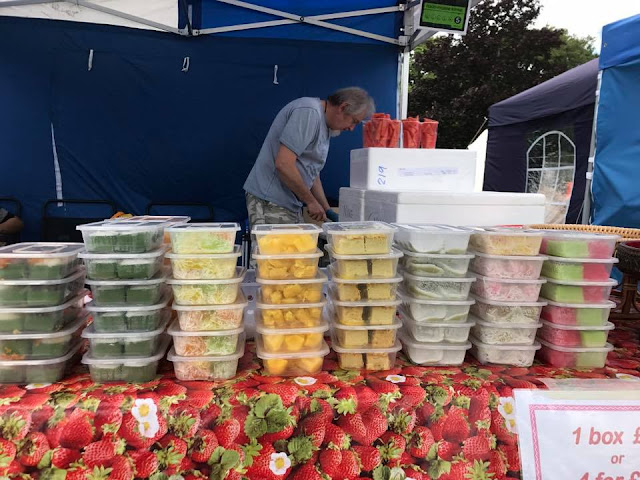