We have been looking at China again this week, including pandas, The Great Wall of China, The Forbidden Palace. Also how we would get to China from our home, as they asked if we could drive to China now to see everything.

We sat and watched this short program on pandas, the children thought it was funny, when it said the bears were doing some exercises, as they said bears can't go to the gym but I explained that every time we go for walk, run, play on the climbing frame or do some dancing we are exercising. They also enjoyed looking at and learning about pandas using this book, Giant Pandas.

I put together a small sensory tray with some of our pandas, using rice as they had asked the other night for some rice play but it was just as I was about to serve dinner. 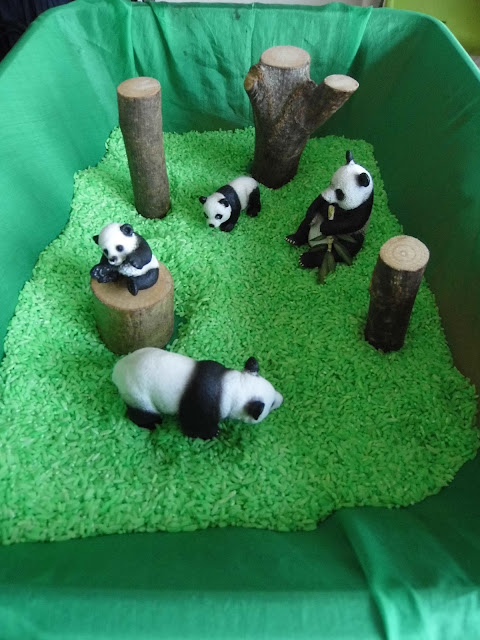 They enjoyed playing with the pandas but then 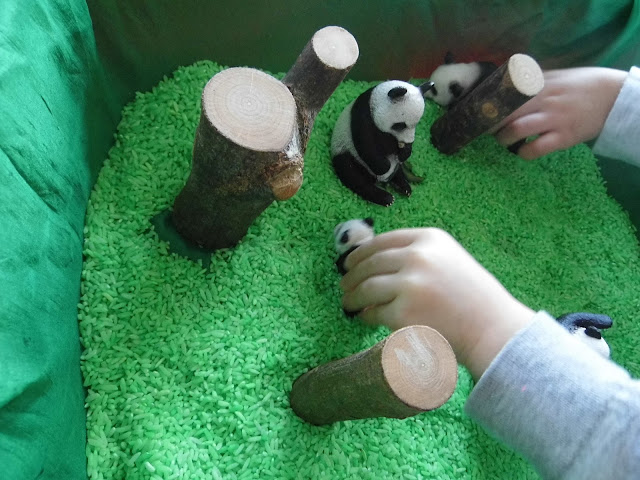 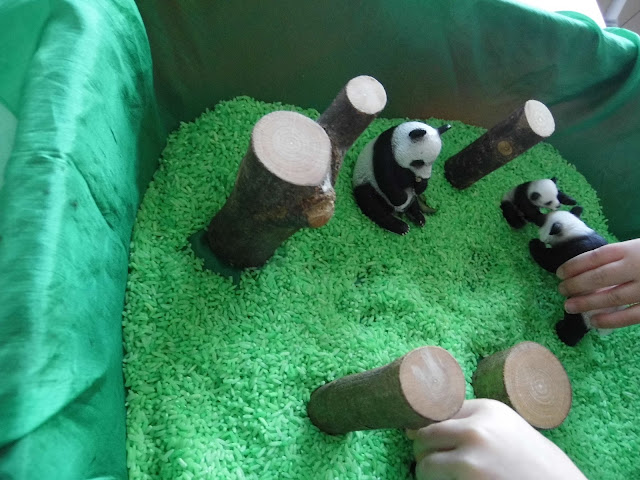 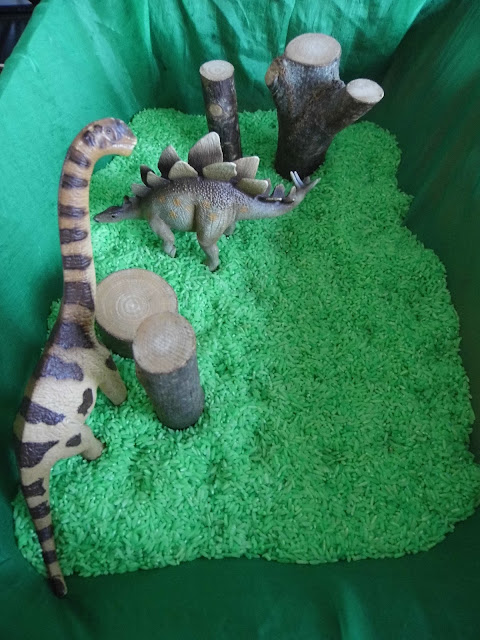 and the pandas created a new home, so everyone was happy. 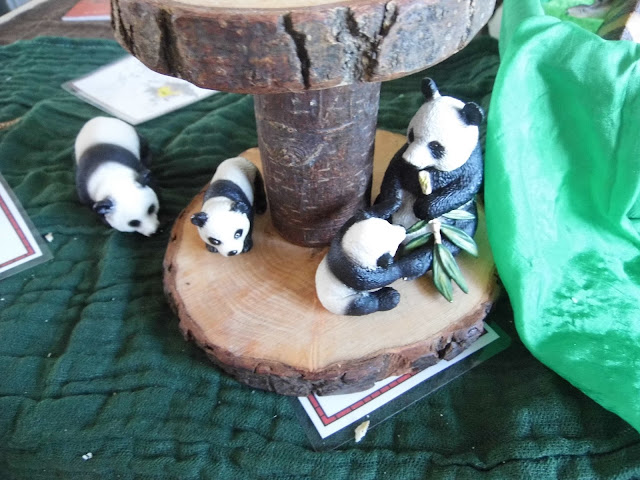 L is very interested in where different countries are, so I  used these wonderful cards, they are not free but I can see me using them again and again over the years, whether it's for history, geography or Chinese New Year, so worth it for us. The set includes picture cards with labels, picture cards with facts and colouring in pages. 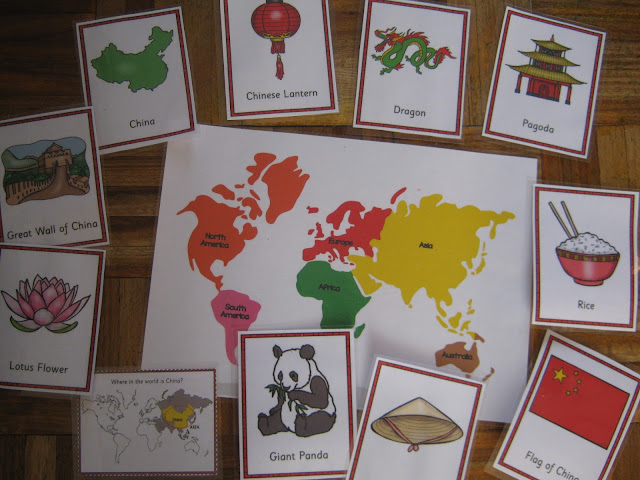 I also brought out some of our flags for the children to match up and then see if they could remember were the country was. They are all countries we have looked at before, that the children have visited or have friends and or family that live their. 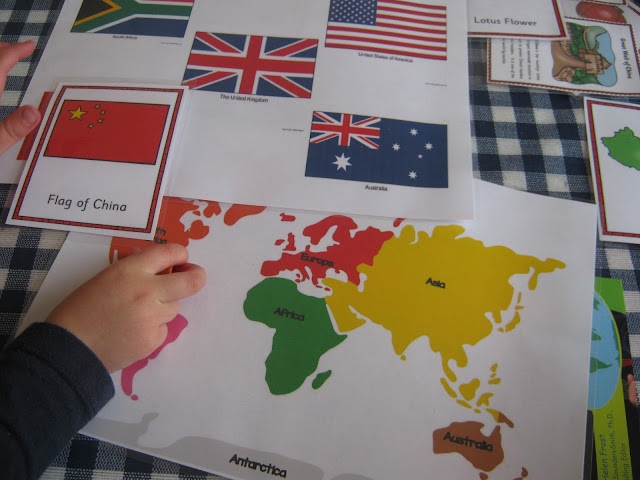 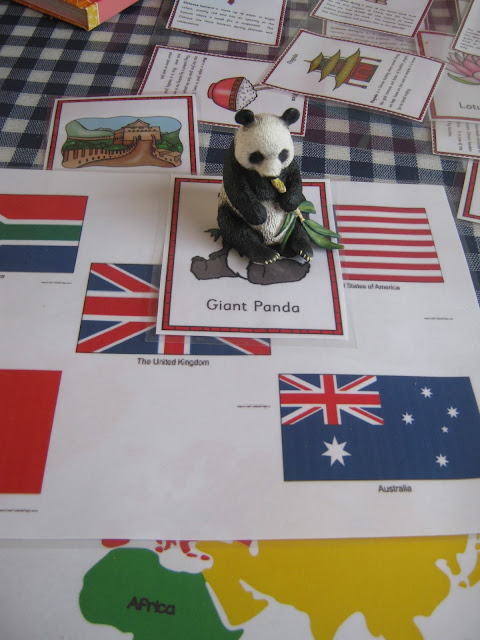 We've had some frosty mornings followed by some lovely sunny days here, the children were intrigued with the frost patterns on the back porch window. 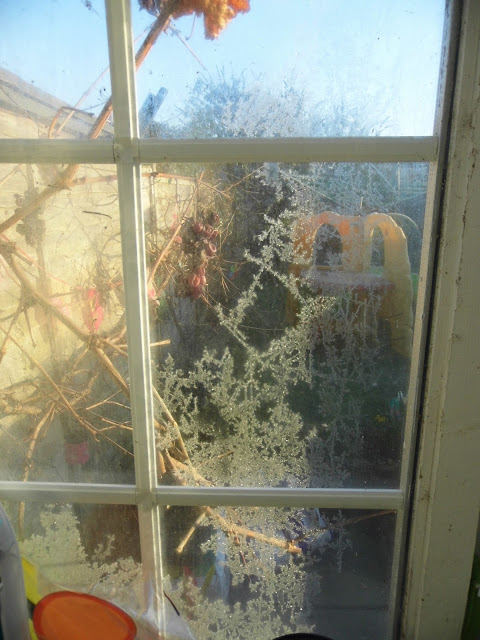 Then they found some ice in the garden, they were fascinated with it, the spent time running their fingers over it and seeing how it felt. 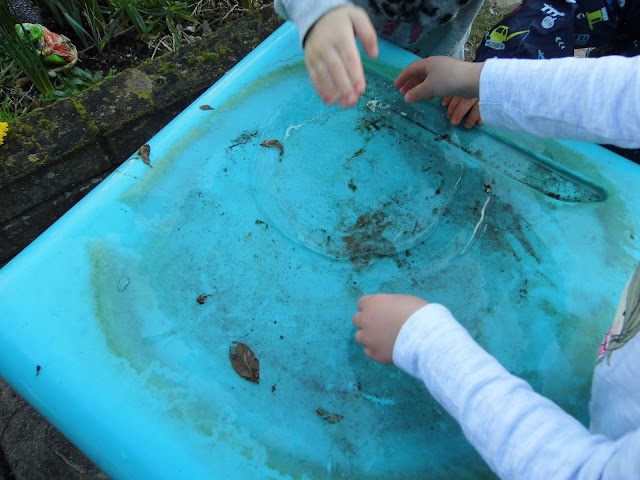 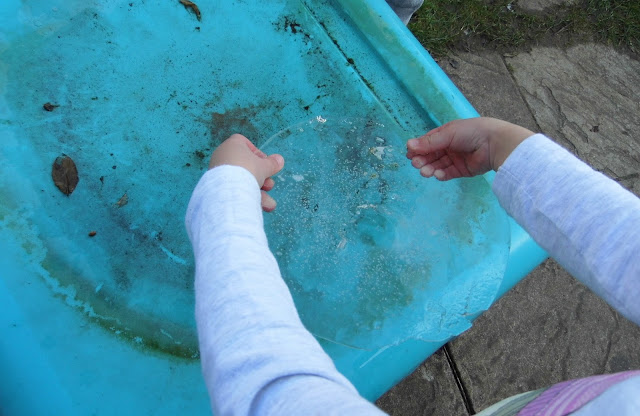 They managed to pick up some pieces, it wasn't easy as it was very slippery, they realised that they could see through it a bit like a window. 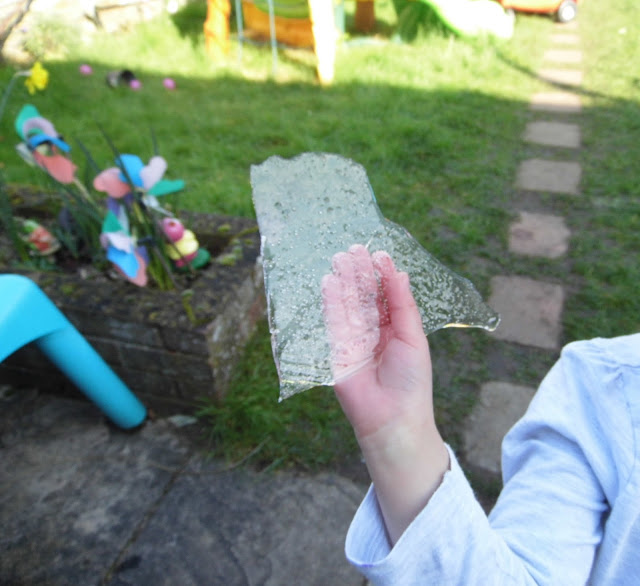 They discovered it breaks very easily. 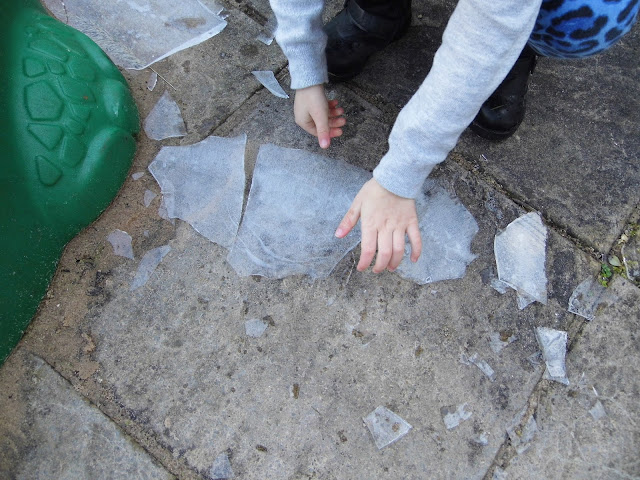 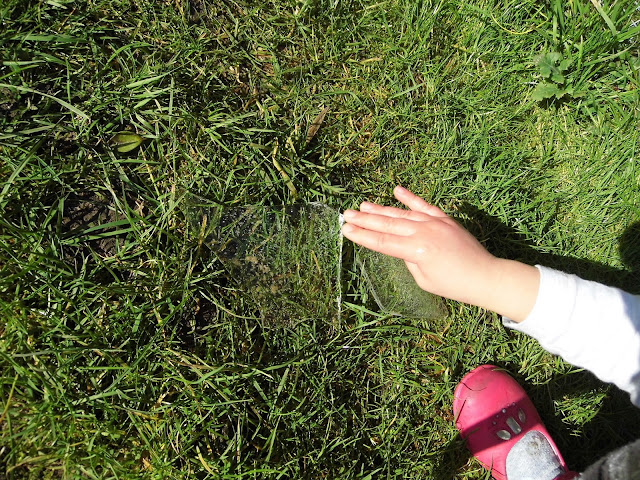 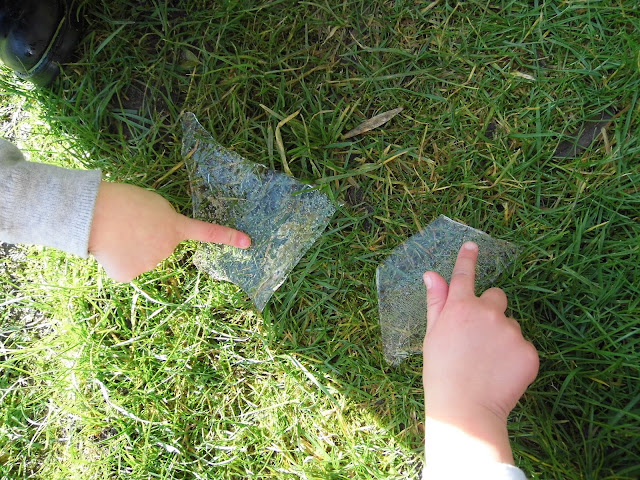 We bought a couple of seed kits from Asda, one was a bucket of sunflowers and the other sweetpeas. L had remembered what seeds need to grow, sun, water and soil. They set about filling their buckets with some soil, using the scissors well to cut the soil bag, 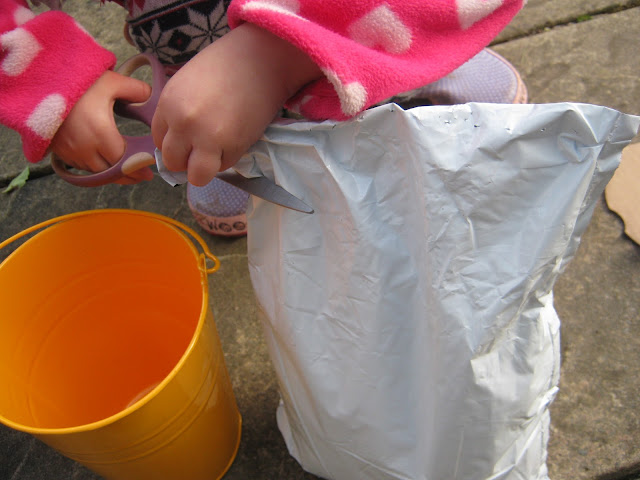 pouring the soil into the bucket 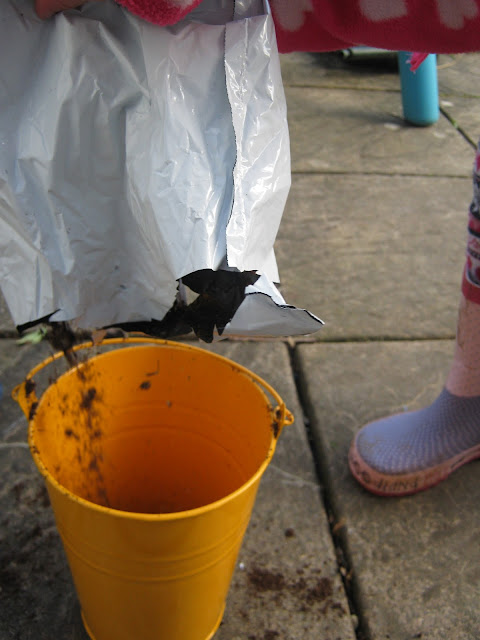 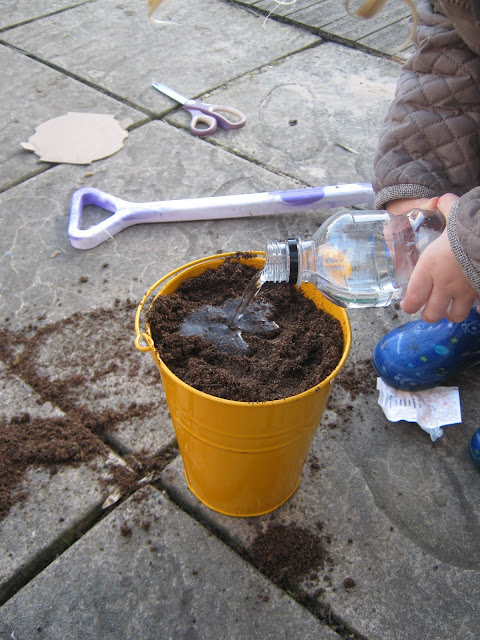 and then planting the seeds. 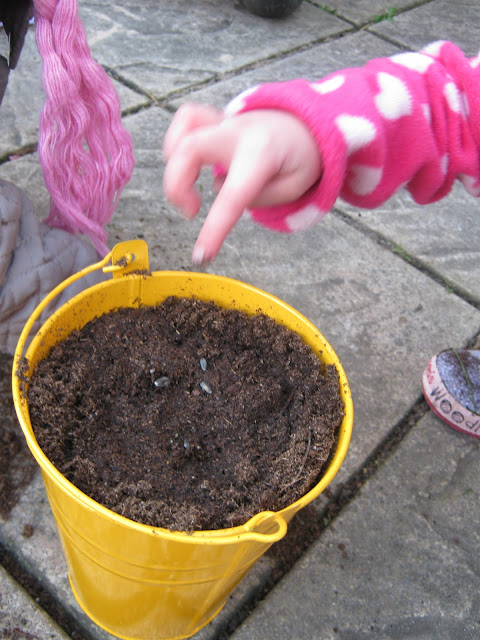 We have enjoyed the sunshine spending many a morning this week in the garden as well as going to the woods for some lovely walks, the children are busy spotting all the new plants growing and listening to the Robins sing.