My younger ones are fascinated by tigers and we have enjoyed the story The Tiger Who Came to Tea and then had some fun creating tiger prints, using shaving foam as a base, first time we did this we used a bit too much black paint, so only a little black otherwise it seems to take over the picture!! 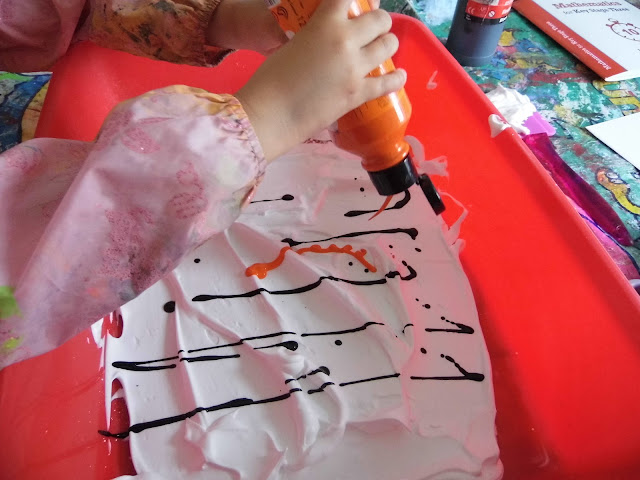 Then use a knife to gently mix the paint into the foam. 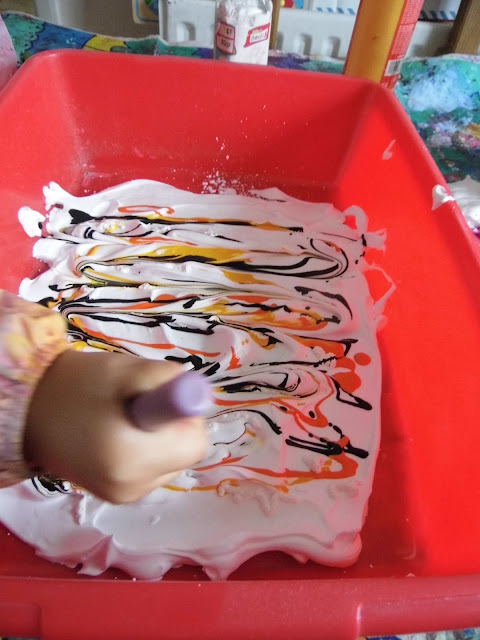 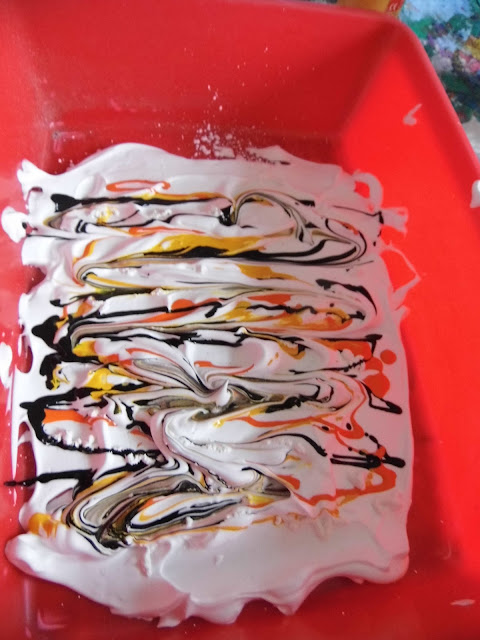 Gently lay a piece of paper down and press on it all over, then leave to dry, while paintings are drying 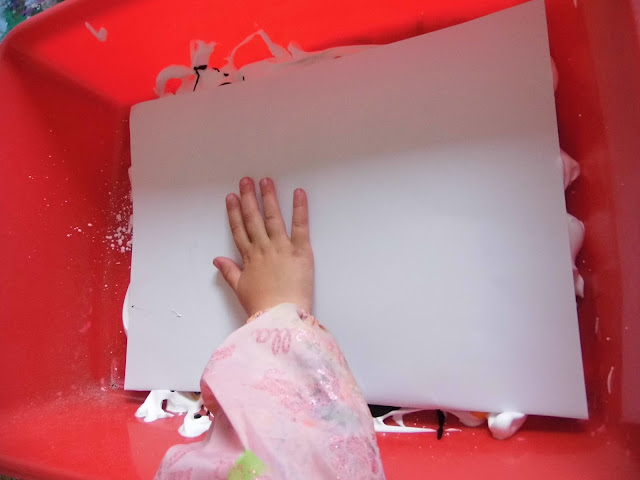 they had a lot of fun mixing the left over paint into the shaving foam and exploring the texture! 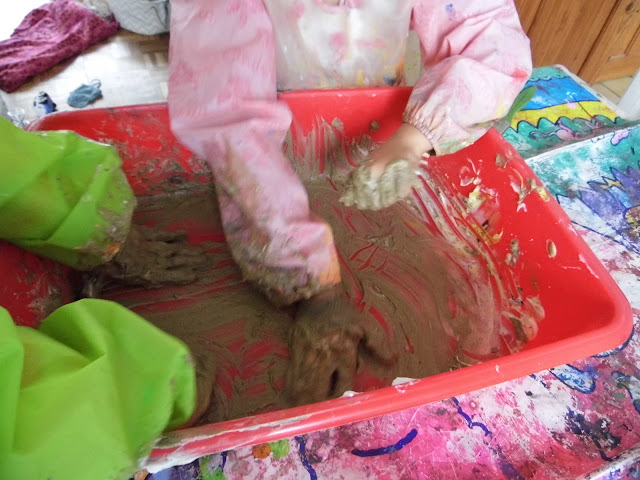 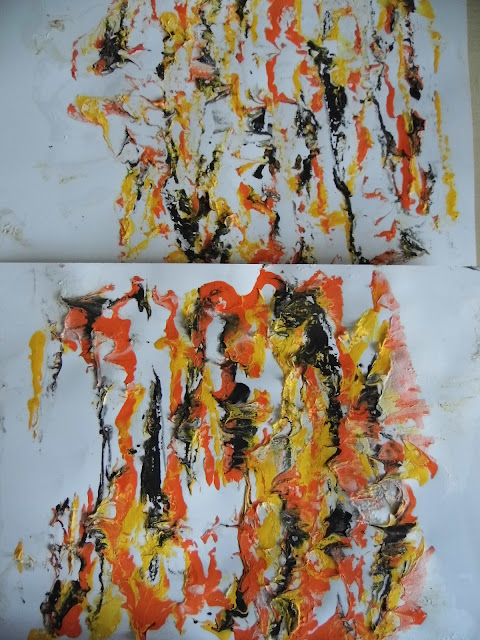 They have also drawn some pictures of tigers and described them in their own words, the top one is a cute mummy tiger carrying her baby and the bottom picture is a rainbow monster tiger. 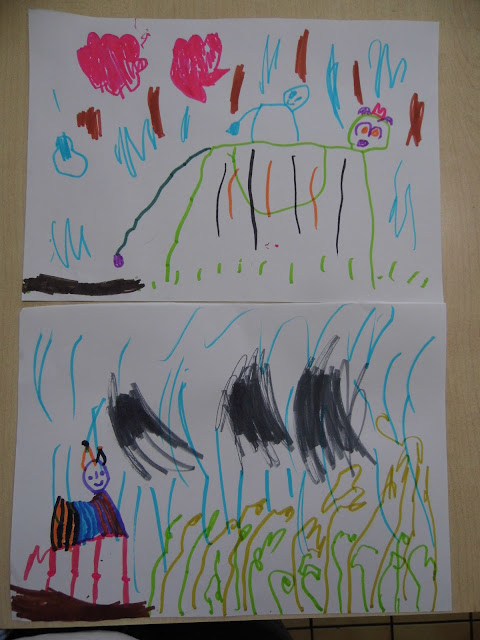 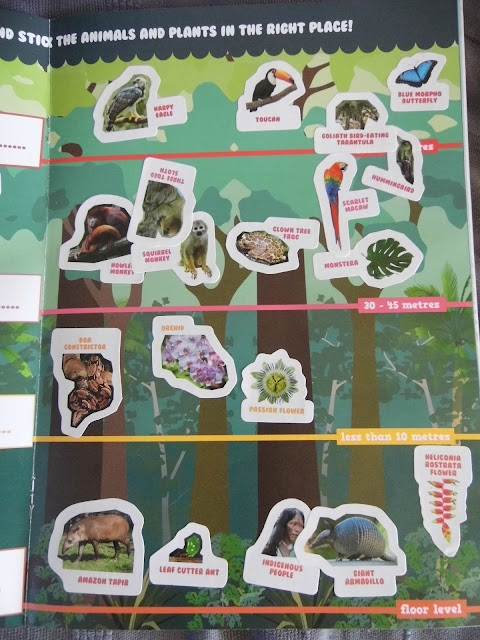 Having fallen in love with the Eco Kids magazines, I've ordered a couple of back issues, including one on the Amazon river, which hopefully will go down as well as the rainforest one did. M has been recapping photosynthesis to help explain why the rainforests are called the lungs of the world and has started to look at deforestation. Yesterday as it was raining so much in the afternoon we sat and watched Rio, which led to a talk about why people were trying to steal the birds, where was Rio de Janeiro, so today's plan to have the maps out and look at Brazil and see where that leads us. Hoping to also do some more art based on Henri Roussea as well but we will see.

M is doing well working through her preIGCSE course, she is on a high as her last assignment came back with an A grade, you can't get better than that. It means even more because she has verbal dyspraxia and as a young child really struggled to speak, lots of speech therapy to help her but it also meant learning to read and write wasn't easy either but she has been very determined and it is paying of now.

I found this series The History of the Home and thought M would rather enjoy it, she has enjoyed the frontier house and the Victorian farm etc, one of the opening scenes was at the Wealden Down Open Air Museum, we have been a couple of times and loved it. Hoping either this year or next we might make another trip there as M was only about 4 or 5 when she went last.

On a crafting front I have just ordered some of this wool in deep water to make the imagine when shawl for a friend, this will be a birthday present, so justifying buying more wool before using up the stash I was supposed to be working through! I alternating knitting at the moment either the main part of L's cardi which is just plain knitting and panel 2 of the blanket with lots of cabling. Reading A Daughter's A Daughter by Mary Westmacott, otherwise known as Agatha Christie, I have not read of her romance books and wasn't sure what I would make of it but actually enjoying it and making me giggle in places. There is a  lovely conversation between an older lady and one entering her 40s  , she talks about how women in their 20's to 40's are biologically and relationship concerned and rightly so but towards the end for their 40s they gain a second blooming in the mind and the spirit and the older a woman gets the more interesting the older they become, a very positive view of getting older. Also have the next two books from The Little Coffee Shop in Kabul to read at some point. 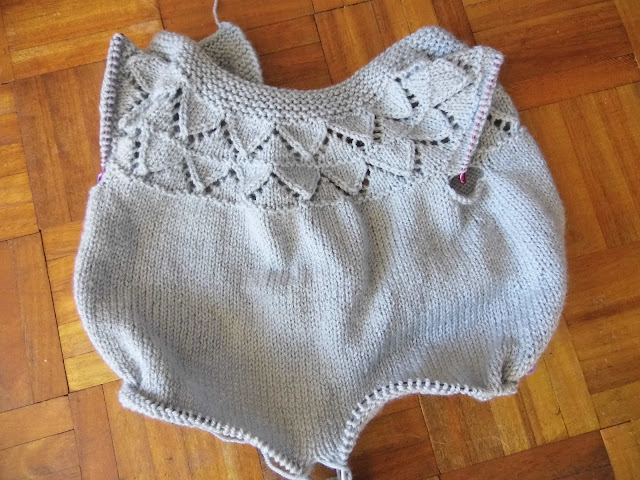 Well my plans for the day might change a bit, L got up and asked to have the colour rice out to play with, so while I finished writing my blog she set up the tray below to play with. 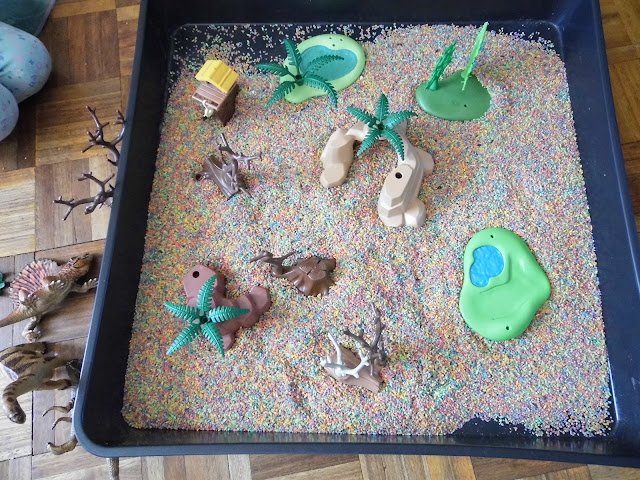 After all the rain and wind we have, this morning we have sun and some photos of the flowers that have survived the weather! 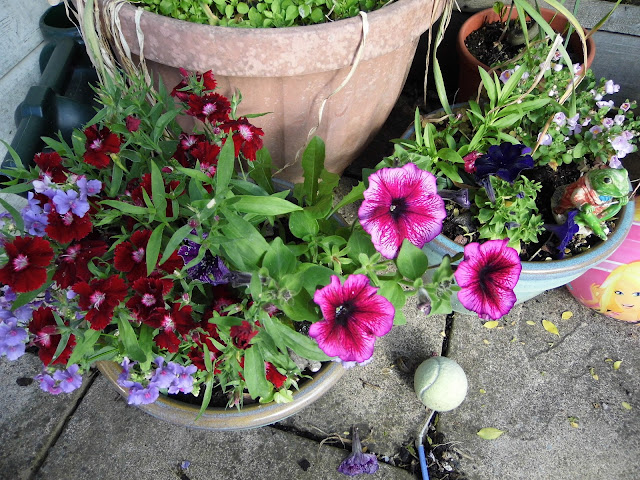 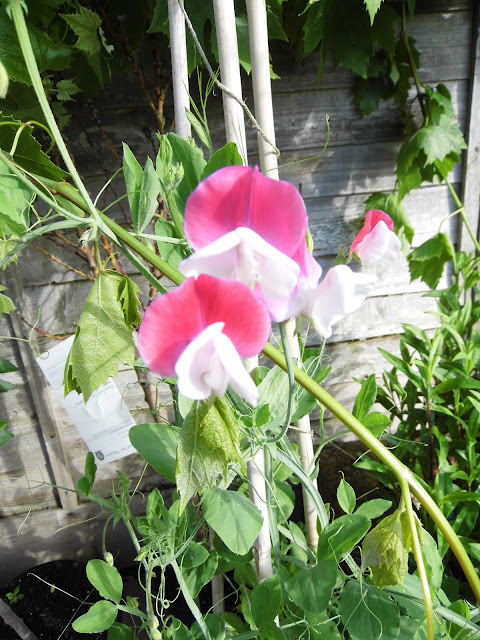 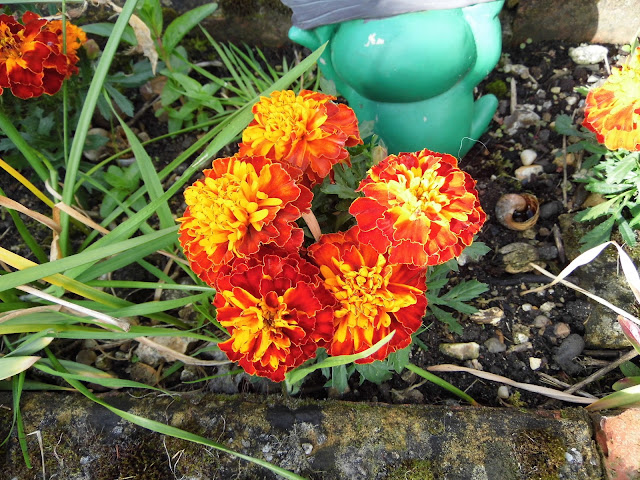 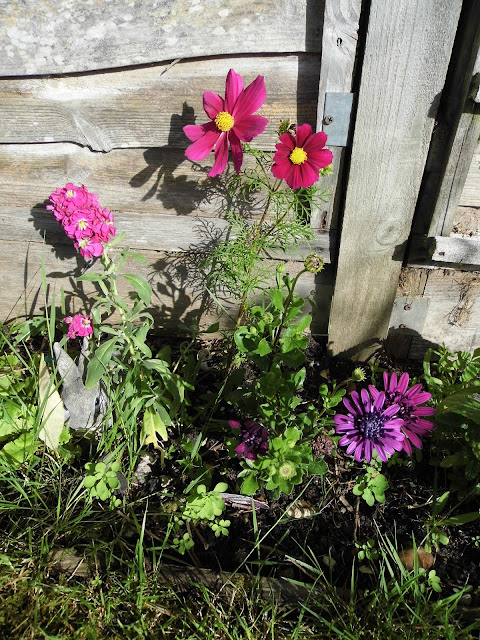 One of my new penstemons is just coming into flower this one is called heavenly blue. 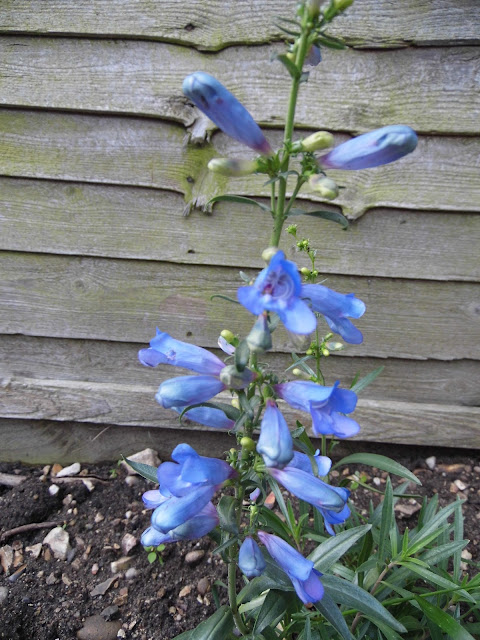 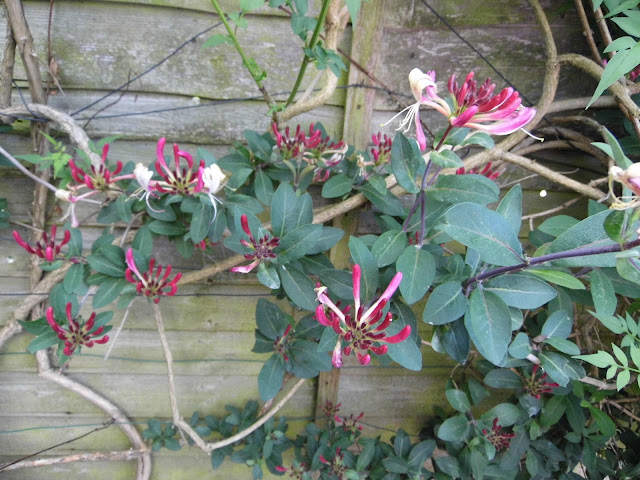 We have some tiny cucumbers growing, ignore the weeds, it's a job for later in the week. 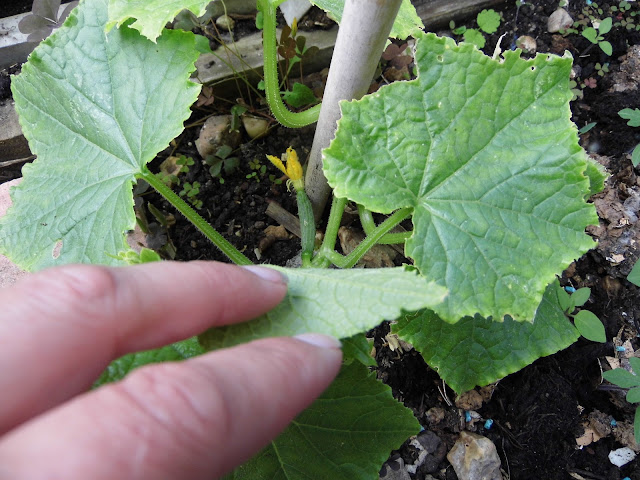 Grape vine has lots of grapes growing, hoping for another lovely crop this year. 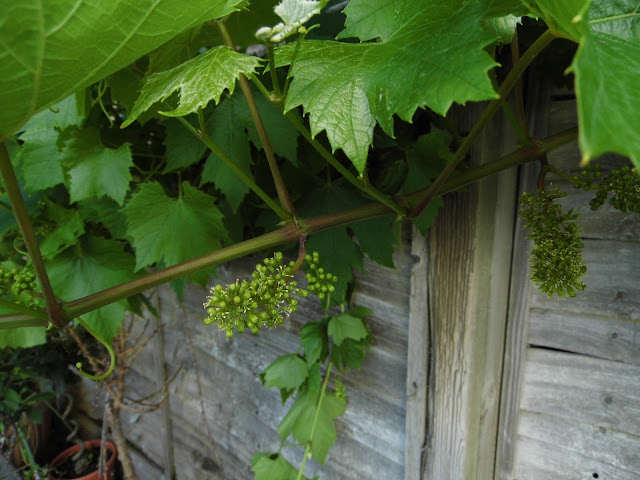 Linking with Nicole at Frontier Dreams
Posted by Helen B at 01:07

Email ThisBlogThis!Share to TwitterShare to FacebookShare to Pinterest
Labels: Around the World, art and crafts, family life, gardening/allotment, knitting, My Reading