Our week and Other Ramblings

So on Thursday I had 4 children here and they spent a lovely hour setting up a kitchen area, cooking meals and opening a cafe and then they decided to tidy it all up. The reason why was so they didn't want to have to tidy up before dinner time tonight!! We try and do a mini tidy before lunch of anything they aren't playing with and a proper tidy up before dinner but this was at 10am in the morning! I asked them what they were going to do all day, they said nothing, they did manage 15 minutes sitting on the sofa looking at books before they decided to build a camp, it did make me giggle. Talking to the parents that night, there have been comments from the children about when they are at Helen's they always have to do some tidying before dinner, the parents are more than happy that the children are encouraged to tidy up, it's just our routine is different to home, if we tidy up before dinner then everyone is here to help. So this is my sitting room after they tidied, I think they did do a very good job. 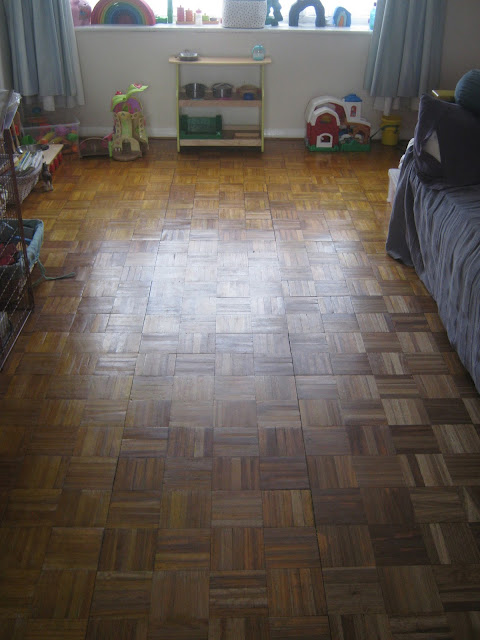 So this weekend I sorted out out meal planning, mixed up enough no knead bread to make 2 loaves and then went food shopping, got some lovely books at the library but still waiting for the ones I requested to come. Home to sort out shopping, divide up nicely risen dough into two dishes to rise again, make a large amount of popcorn for snacks and then make 3 lots of shepherds pie base. I find it easier to double or treble recipes like shepherds pie, curries, bolognaise sauce etc as it is fairly easy to dice a the extra veg and later saves time on cooking on busy days. I can always remember visiting my Aunt as a child and sitting in her kitchen listening to her talk as she prepared food, how she always made two cakes, or double batch of biscuits so when she had visitors she would always have a nice selection of cakes etc for teatime with very little effort. She would do the same with soups and other meals, it was listening to her and seeing how effortless she seemed to make it, that stayed with me, so that when I had my own place, the batch cooking idea was well and truly sown.

On a budgeting front, I was chatting with friends about budgeting and how we all managed our food budgets. I have a set amount each week to spend, if we come in under budget, I take that amount out, so if your budget was £50, you only spent £40, I would take out £10. This slowly adds up over time so I am then able to do a bulk shop at the butchers, a bulk order from one of the ethical online stores, or for birthday parties.

Monday, the morning was spent playing shops and cafes, then reading a Buddhist story from A Year Full Of Stories, we also read from The Buddhist Apprentice and talked about meditation. We have enjoyed some guided story meditation for children, you tube has a lot of lovely ones, our favourite at the moment are sleep ezy bedtime stories ones, perfect also for a mid afternoon relaxation when baby is having a nap and we can pause and recharge too, we probably only use them once or twice a week but still enjoyed. We have been looking at different statues of Buddha and some Buddhist temples, then we had the chalk pastels out to draw some lotus flowers. We also learnt that different colour lotus flowers have different meanings. 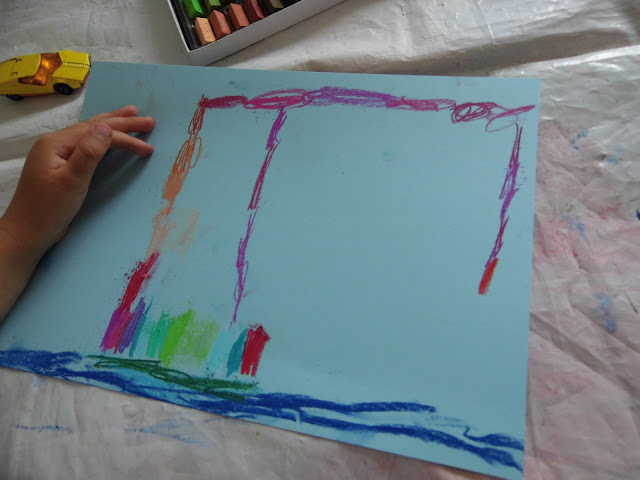 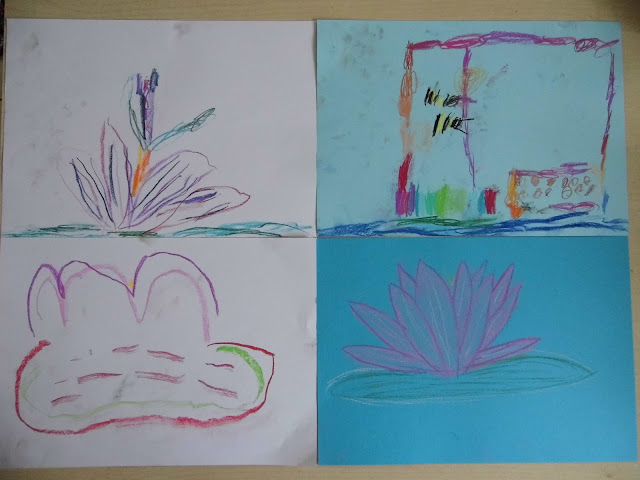 Tuesday saw as practising some yoga and then spending the afternoon at the park, meeting up with lots of other home ed families. There was some school work done and stories read in between.

Today has been wet and waiting in for a delivery, which turned up an hour than their estimated time slot. Had hoped to be able to get out and the children could have a puddle jumping walk, instead we have had the lego out and L has done some letter and number work while M works through her maths and english course.

On a crafting front I have finished the lining and outer parts of L's coat and attached them at the hood, now to pin all around the edges and top stitch them together. Not sure if I will hem the coat and sleeves or wait till Autumn and then get them the right length. last time I made the coat, the sleeves were an ok length but L prefers them longer, so this time I just cut them extra long, put it this way there is plenty of growing room!! least easy to sort out the length and better too long than too short. 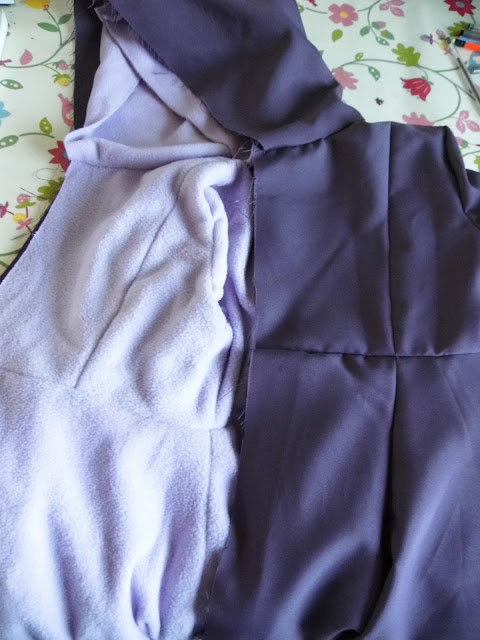 Cat embroidery is coming along well, the third kitten is starting to appear, managed to knit a few more rows of panel 2 of my throw, it is slow going as it's a lot of cabling on every knit row but last night past the halfway mark! L's cardi is coming on nicely, not done as much as thought I would but decided to try and sort out a couple of more cupboards. Finished The Monogram Murders, though I still stick by my it's not quite Agatha Christie but did enjoy in the book and sort of forgot that the main character was supposed to be Poirot. Now when I was at the library came across Homeward Bound at the moment the author is talking about how woman in particular are returning to the crafts and lifestyles that their Mother's ran from. It has left me reflecting on my own crafting journey, which started when little watching my Gran knit, my Gran taught me some basic knitting. At school textiles was an option which I took and learnt some very basic sewing skills, the idea was that our class was supposed to sew a straight skirt, therefore learning, to sew seams, darts, waistband, hem and fit with darts. Unfortunately my Mum had other ideas and decided first sewing project had to be something very basic so I was left sewing a very basic T-shirt style top in a non stretch cotton polyester. Luckily this didn't put me of and I discovered the wealth of craft books at our local library and spent many evenings pouring over them, from these I taught myself to crochet, cross stitch, some free hand embroidery and bobbin lace. Bobbin lace is something I hope to get out and have a go at again in the future. My Uncle as a hobby did lots of wood turning and made me some beautiful bobbins, which I will always treasure, some have a little handwritten label on saying what wood he used. Think I was ahead of my time with crafts, gardening and allotment and was always looked at as though I was bit old fashioned but now it seems to be the new norm. Did also try but failed at tatting, just couldn't get the hang of it. When did you start to craft and what are you favourites? 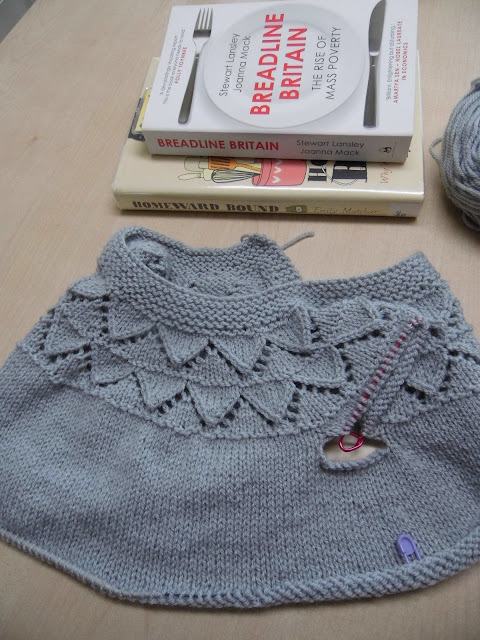 As to Breadline Britain think the title says a lot about the book, at the moment we have covered the way poverty is defined e.g. using the 60% of the median income, those of less than 60% of this income are deemed in poverty. Others are lists of what the public deem essentials and how this has changed over the decades. How poverty can be seen as an individualistic problem as in the reason the person is poor is down to their life choices, not working hard enough etc. Or a societal view, that yes still room for individual choices but also society as a whole, the social and economic policies, lack of jobs, zero hour contracts, jobs that only over a few hours week but days vary each week so makes it hard to take a second job, the cost of housing etc.  A person's income is down to so many choices some personal and some outside, it is down to their career choice, the salary the job commands, the opportunities this career affords them, do they live in area where unemployment is low. I could go on but poverty and the way an individual copes with poverty varies greatly and is dependent on so many things, their own ability and aptitude, their social network, family, what support their social and family network offer and what outside support and help there is.

Email ThisBlogThis!Share to TwitterShare to FacebookShare to Pinterest
Labels: Around the World, art and crafts, family life, knitting, menu planning, My Reading, sewing