I think we have nearly come to the end of our dinosaur theme, the children are noticing the change in the weather, leaves changing colour and spotting the first conkers, so think time to do some Autumn planning as over the last week they have hardly mentioned dinosaurs. Anyway back to the last bits that we have done for the dinosaurs, I think we have read every dinosaur book we own several times over, watched more than one episode of Andy's Dinosaur Adventures. I found some dinosaur skeletons, that the children cut out and then had to work out were or how they fitted together. We then named the different bones we could see, I showed them on their bodies the same bones. 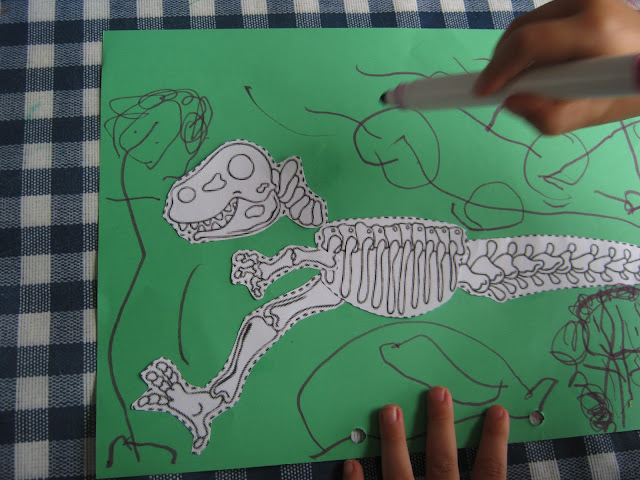 L was really interested in this, so I found out a poster we had of the human skeleton and a hare, they spent time asking what the different bones were called and trying to find the bones on their bodies, with some giggling involved. I might have to get down from the loft our skeleton for them. Wish I had thought before hand that they might be really curious about their own skeleton as I could of got it down and put together before hand but at least we had the poster. 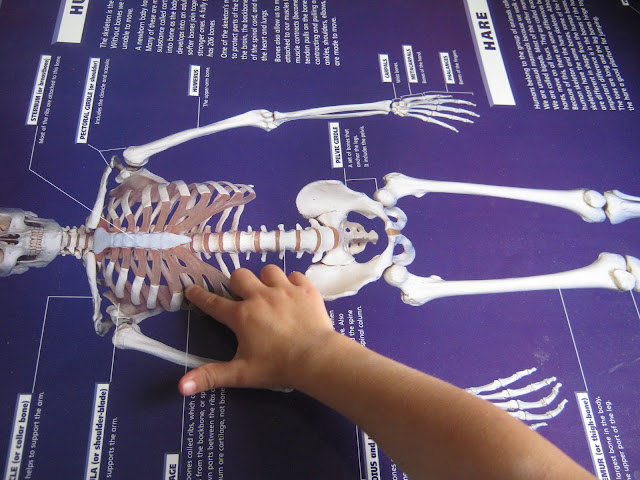 They also painted some wooden bendy snake to go with the story of Harry and the Swamp, the only problem was they wanted to make a primordial swamp with the jelly baff for the snake. I explained that I didn't think the paint would last very long in the swamp, did they want to risk it? They didn't want to loose the paint but really wanted to do the swamp, so I am on the hunt for some plastic bendy snakes, the sort that I as a child used to get in party bags, don't want any too life like snake toys! 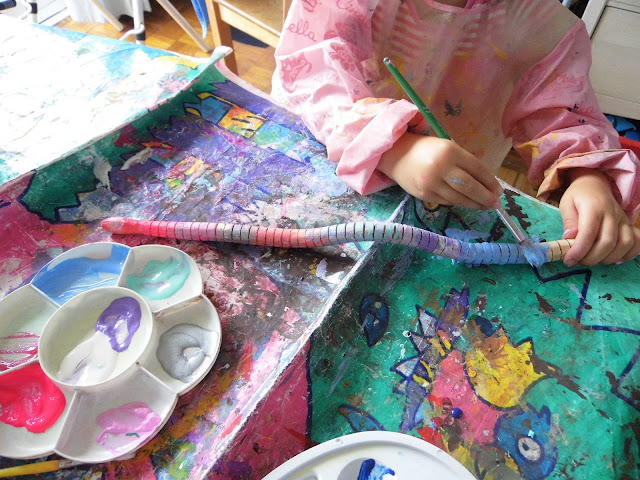 Looking at shapes and patterns, I gave L and older minded children a handful of shapes and asked them to make a pattern, which they enjoyed doing. Some just enjoyed seeing how they could fit them together others enjoyed making them into different things and telling a story with them. 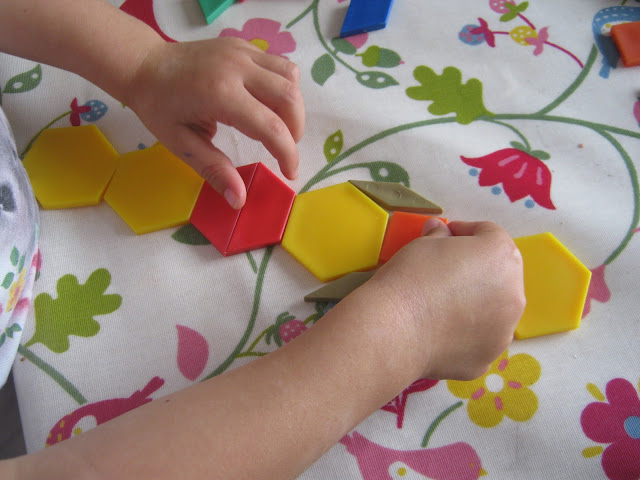 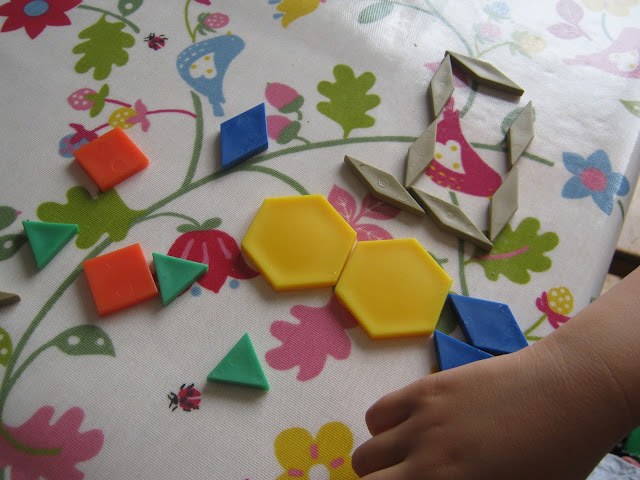 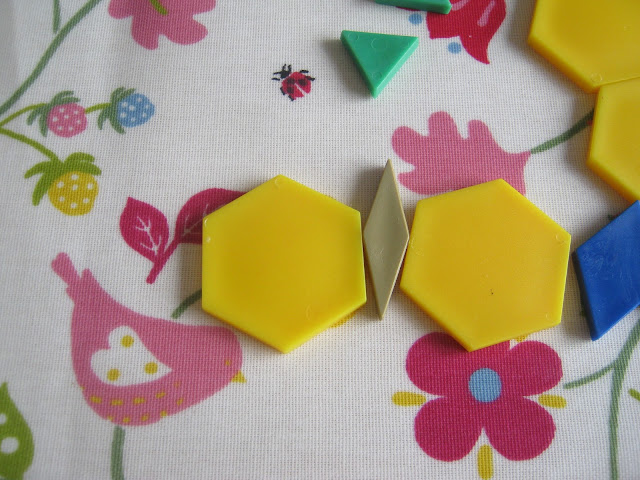 A flower for the butterfly to enjoy. 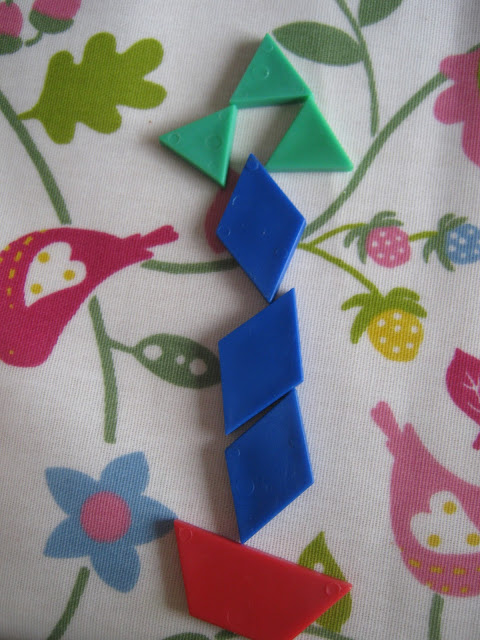 A person to look after the flower for the butterfly. 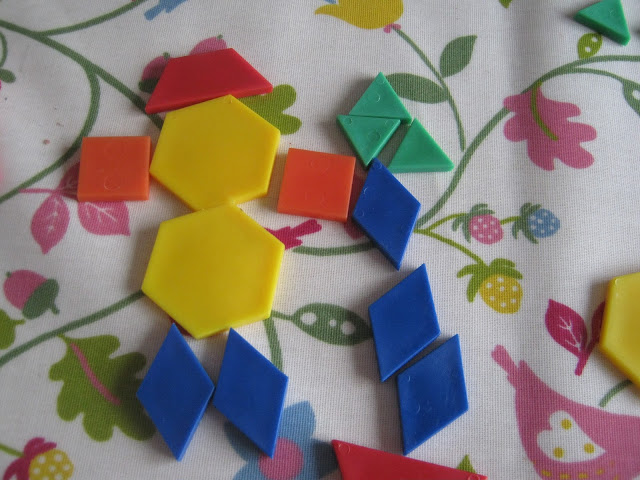 One of my mindies Mum's has passed on a plastic kitchen, that also has a small washing machine, it has gone down very well, to say the least! They spent the morning it arrived washing all the dolls clothes and have repeated this activity several times since. They wanted a clothes line to peg them out on, so found out a couple of skipping ropes and hooked them around the drawers for them to use. 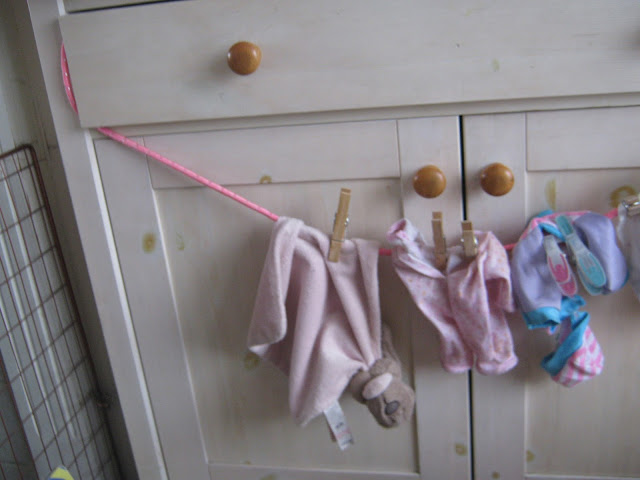 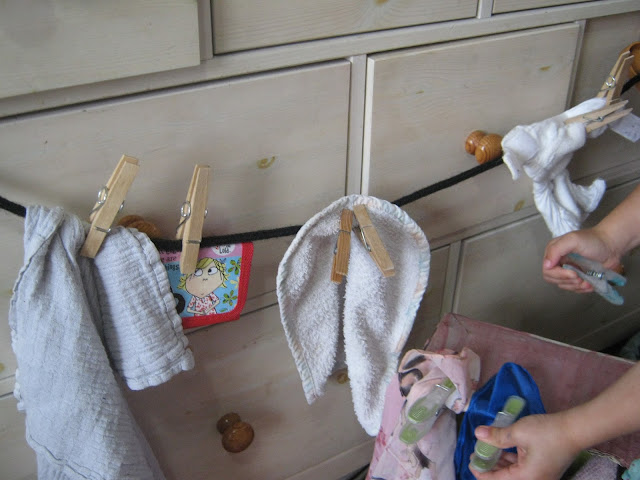 Also realised that if we had been doing the normal school thing L would of started reception this month, instead I am starting the journey of home eding my 3rd child and very much looking forward to it. How did we come about home education, there was a variety of reasons, before I had children it always interested me, had read several books and watched some documentaries. The thought that a child could learn at their own pace, not feel like they are behind if they are struggling but equally if they really enjoy a subject you can follow their interests and go as into the subject as the child wants to at a pace they enjoy. You can adapt your day around the children's needs, if they need a sensory/movement break they can easily be factored in, love cooking, then we can do more cooking. When J was little though I liked the idea of home education, I didn't know anyone locally and we didn't have a computer/internet then. So he did a day a week at playgroup moving up to 2 days and then went to local nursery. Playgroup was fantastic and he enjoyed it, they always double checked and made sure food was ok with him, he had a nut and egg allergy but nursery was different and within a term we decided to remove him. Now this was partly due to discovering that a neighbour of mine was removing her 4 teenagers from school to HE and J also saying that we did more at home and he learnt more at home. I think at this stage DH thought we would just do the nursery years and then start school at 5, well J flourished at home and we didn't even think about school until secondary age. We did year 7 at home but by the end of the year most of his friends had either moved out of the area or had gone to school so he decided to try school and that worked out fine for him to, teachers were surprised that he adapted to the school day etc like he had always been in school. So M we didn't even consider school and L will be home educated too.